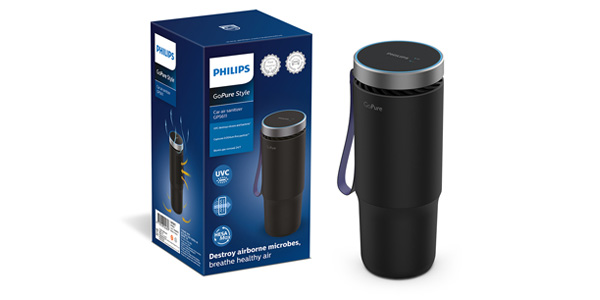 The air purifier features a Philips SaniFilter Plus filter, a powerful UVC light and a HESAMax filtration cartridge.

Lumileds said it has taken a major step in addressing the growing concern over air purity and respiratory illnesses brought on by the COVID-19 pandemic.

In response, Lumileds has created the new Philips GoPure GP5611 automotive air purifier, a powerful and innovative car air purifier that’s engineered to clean air quickly and efficiently in most vehicle interiors and help reduce the risk of airborne transmission of viruses and bacteria, according to the company.

“The new Philips GoPure GP5611 is so advanced that it can capture ultra-fine particles, including microbes, in just 10 minutes, and its convenient design makes it an easy fit in most vehicle cup holders,” said Aubry Baugh, Lumileds product marketing manager.

The GoPure GP5611 features three layers of defense: a Philips SaniFilter Plus filter, a powerful UVC light and a HESAMax filtration cartridge.

The Philips SaniFilter Plus filter has been tested at IUTA laboratory in Germany and proven to capture 99% of ultra-fine particles, including particles as small as 0.004 microns that can get deep into the lungs and may create serious health risks, according to the company. The filter captures bacteria and respiratory viruses as well as airborne allergens such as pollen, dust mites, mold spores and pet dander at a 99% efficiency.

The Philips SaniFilter Plus filter features a special anti-microbial layer to inhibit the growth of microorganisms inside the device, including mold spores.

UVC light damages the molecular bonds that hold DNA together, so it is highly effective at eliminating bacteria and viruses. For decades, UVC light has been used for sterilization in hospitals, transportation, factories and more. Now, it is being used to help clean the air inside cars.

The Philips UVC lighting module inside the GoPure GP5611 is designed to kill bacteria and viruses trapped in the filter by exposing them to ultraviolet light. The UVC LEDs used in the module were tested independently from the air purifier at KR Biotech Lab on Sars-CoV-2 (COVID-19-causing virus) by applying UV light directly onto the virus in a petri dish, effectively destroying 99% of the virus in five minutes. In the GoPure GP5611, the UVC light acts on the particles captured by the filter.

An air purifier does not treat or prevent COVID-19, and by itself, does not protect against exposure to the virus that causes COVID-19, but it can be part of a plan to help protect motorists from exposure, according to the EPA.

Advertisement
In this article:Lighting, Philips Lighting

Schaeffler Launches Bearing Line For Agricultural Equipment
Connect with us