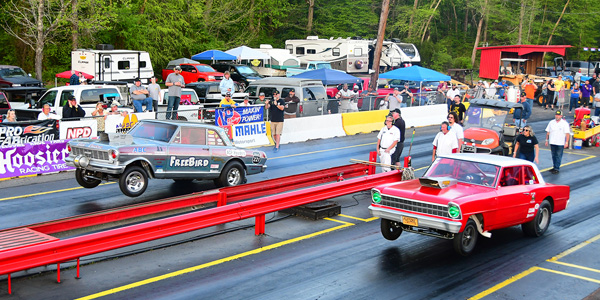 SEGA is one of the fastest-growing forms of drag racing in the United States.

SEGA is one of the fastest-growing forms of drag racing in the United States, with its ‘60s-era-style vintage vehicles competing with many of the original gasser rules and styles – 105 four-speed gassers, super stocks and A/FX race cars.

With grassroots participation limited to the look of a 1967-era drag car, rules are carefully constructed to ensure that the body, wheels/tires, chassis/suspension and engine compartment are in line with what was prevalent during this exciting era of drag racing, so no automatic transmissions are allowed.

SEGA will host 11 events in 2022. The season starts March 11 at the Silver Dollar Raceway in Reynolds, Georgia, and concludes the weekend of Nov. 4 at the Shady Side Dragway in Shelby, North Carolina. All races can be watched live at www.southeastgassers.tv, or viewed uploads can be found on YouTube and on Facebook. SEGA’s two exhibition classes are H/Gas and A/FX.

“Anyone that has had the opportunity to attend a SEGA event walks away with a smile on their face,” MAHLE Motorsport Marketing Manager Joe Maylish said. “These are just fun events for the entire family where mostly stock vehicles compete. The rules keep it authentic to the era – no special fuels or additives, old school tachs and gear jamming old-school transmissions – even the body styles are true to gasser racing of the ‘60s. MAHLE Motorsport is excited to become a full sponsor and we look forward to an exciting season of wheels-up racing.”

Rocky Platt, SEGA VP and director of operations, added: “Southeast Gassers Association has brought back old-school racing like the pioneers of the sport and Hall of Famers such as my Dad and Uncle Huston and Hubert Platt and many others that made drag racing what it is today – except SEGA keeps it just like the ‘60s and families love it.”

MAHLE Motorsport To Sponsor All SEGA Classes For 2022