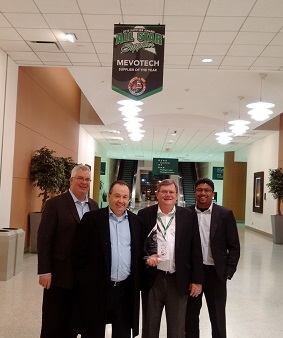 The Supplier of the Year award is the highest recognition that O’Reilly bestows on an annual basis.

Mevotech LP was recently named 2015 Supplier of the Year by O’Reilly Auto Parts during the company’s Annual Conference in St. Louis, Missouri. The Supplier of the Year award is the highest recognition that O’Reilly bestows on an annual basis. The award holds recipients to the highest standards in all functional areas of support to the O’Reilly network, and recognizes Mevotech’s overall service, fill rates, high-quality parts and exceptional sales growth throughout 2015.

“We are proud to have played a part in the outstanding sales O’Reilly attained in 2015, and we are honored to have received this award,” said Scott Stone, executive vice president, sales and marketing at Mevotech. “This award recognizes the hard work and dedication of all the employees of Mevotech, and celebrates our growing partnership with O’Reilly.”

This is the second time that O’Reilly Auto Parts has named Mevotech Supplier of the Year; Mevotech first earned this honor in 2010.