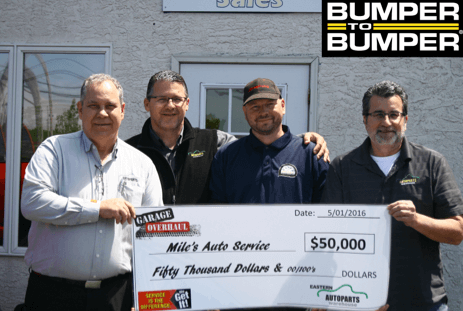 The Sewell, N.J., shop is the first of two eventual winners in the Alliance’s spring sweepstakes. 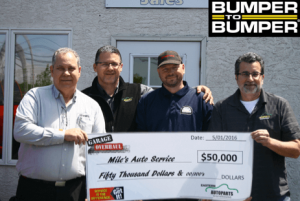 SEWELL, N.J. — Fred White, the owner/operator of Miles Auto Service was more than just a little stunned when he was recently paid a visit by his sales and marketing team from Eastern Warehouse Distributors. Fred was the first of two winners of a $50,000 shop makeover given away in the Alliance’s Garage Overhaul Sweepstakes.

“When I told Fred that he had won, he asked me over and over if I was serious,” said Shane Norman, director of marketing for Eastern.

As the realization settled in, White began thinking about how the money could be put to good use. He noted improvements that would greatly enhance both the cosmetics of the shop, the utilization of new technology for customer service, and added tools and supplies to better facilitate and elevate his business platform in general.

The rules of the sweepstakes allocate monies to be spent on exterior and interior cosmetic improvements as well as a significant portion of funds for technology and equipment.

Fred wanted to focus on an “exterior facelift” that will differentiate his storefront from other buildings nearby. Key among that was to replace the sign face on his stand-alone lighted sign in the front, and add an illuminated sign to the front of the building.

Fred’s shop is already well equipped with advanced technology tools, but now, with a proper customer service area, he plans to capitalize on the capabilities with better customer relationship management software. He and his team are highly focused on training, so he plans on utilizing the refurbished area for evening technical and team training programs.

The shop currently has five bays, but only four lifts. So the obvious call is the addition of a lift to increase the productivity of the facility.

Miles Auto Service is a longstanding and valued customer of Eastern Warehouse Distributors. They are a member of Eastern’s Certified Service Center program, and an active participant in the company’s Service Center Advisory Group.

White noted that winning this sweepstakes will give him the ability to elevate his business to the next level. In his words, “Simply put, this opportunity will allow us to further improve the customer experience. My goal is to create a loyal client rather than a transactional customer.”