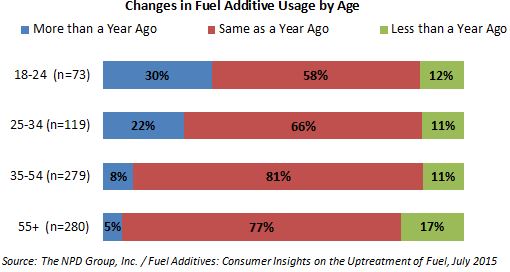 While Millennials love smartphones and sneakers probably more than any other generation, we can also say the same about fuel additives.

This year, the Millennial generation is expected to surpass the Baby Boomers and become the largest living generation in the United States (Source: U.S. Census Bureau). With a projected population of 75.3 million and a reported $200 billion in annual purchasing power, it is necessary for retailers, manufacturers, and marketers to understand and pay close attention to the behaviors of this newer, diverse breed of consumers.

Technology and fashion may be among the top industries that come to mind when considering Millennial consumption, but this generation is also leaving its tracks in the automotive aftermarket world. While they love smartphones and sneakers probably more than any other generation, we can also say the same about fuel additives. A recent study conducted by NPD found that 30 percent of younger Millennials (aged 18-24) said they would increase their usage of fuel additives, making them three times as likely as consumers aged 35-54 and six times as likely as those aged 55-plus to say this (Fuel Additives: Consumer Insights on the Uptreatment of Fuel, July 2015). Whether Millennials upgraded their fuel at the pump or treated it with a packaged additive, they are using more additives and are more concerned than any other generation about treating their fuel.

What is spurring this behavior? When asked why they would use more fuel additives, most Millennials cited “aging vehicles,” “problems with vehicles,” “a clean engine,” and “more educated about benefits” among their reasons. According to NPD’s Motor Fuels Index Database, Millennials are the most likely of any generation to drive older vehicles, as 36 percent report that their vehicle is at least 11 years old.

Understanding that Millennials are driving older cars and purchasing more fuel additives for a variety of reasons indicates that they are looking to increase their vehicle’s longevity and stretch their dollar. To attract Millennials, messaging around additives, cleaner engines, and increased vehicle longevity may help to capture this important group of consumers.

To read more from David Portalatin and The NPD Group Blog, click here.

Millennials Are Adding Fuel Additives Because Their Cars Are Old, Says NPD Survey