The company’s automotive safety message will reach millions at ballparks through hundreds of game broadcasts.

MONROE, Mich. – It’s Opening Day of the 2013 Major League Baseball (MLB) season – and for Tenneco’s Monroe shocks and struts brand, which will debut its  “Everything Gets Old. Even Your Shocks” automotive ride control advertising campaign for baseball fans across North America. The Monroe “Everything Gets Old” message will appear in behind-the-plate and baseline banners in several MLB stadiums and will reach millions of additional fans watching game broadcasts throughout the season. 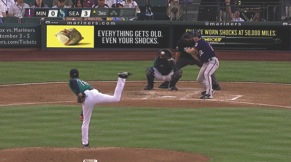 The “Everything Gets Old” campaign reminds consumers that their vehicles’ shock absorbers and struts eventually wear out and need to be replaced. Because these ride control components are “hidden” beneath the vehicle, the campaign compares their gradual wear to more readily visible consumer items, including bananas, shoes, socks, tires, toothbrushes – and even baseballs. In addition to MLB stadiums, “Everything Gets Old” will be featured in hundreds of roadside billboards, thousands of radio and print ads, and in an extensive digital campaign that includes Web banners, “in-app” music/radio ads and other engagement-driven elements.

The Monroe brand’s consumer messages are a common sight for baseball fans; the brand’s previous “Save the Squirrel” campaign was seen by millions of fans attending games and watching MLB broadcasts over the past five years.

“Our in-stadium banners generate tremendous response, both among fans at the ballparks as well as the millions of consumers who see our message in game broadcasts and in highlights replayed in sportscasts and shared via the Web,” said Monroe Brand Manager Carri Irby. “Our goal is to connect with vehicle owners who might never have thought about the condition of their shocks and struts, and to encourage them to have ride control safety inspections performed as part of their next vehicle service occasions.”

For more information regarding the Monroe “Everything Gets Old” campaign and/or Monroe products, contact your automotive service provider; visit www.monroe.com; like Monroe Shocks on Facebook at facebook.com/MonroeShocks; download the new Monroe App for your iPhone, BlackBerry or Android smartphone; or write to: Monroe Marketing, One International Dr., Monroe, MI 48161.