Engine lubrication requires a motor oil that can flow easily at low temperatures for easy cranking and quick circulation, maintain film strength and viscosity at high temperatures to protect critical engine parts, minimize friction for better fuel economy and disperse and neutralize crankcase contaminants to keep the engine clean. The oil also has to meet or exceed American Petroleum Institute (API) minimum performance standards as well as various auto manufacturer performance specifications (which can vary depending on the year, make, model and engine). No conventional or synthetic base oil can meet all of these requirements without some help. That’s where additives come in. 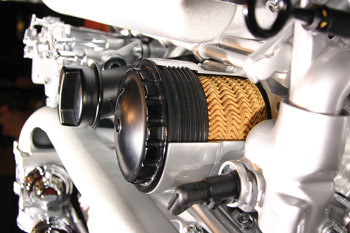 Friction modifiers and anti-wear agents are added to the oil to reduce friction and minimize wear. Motor oil also has to contain dispersants, detergents, foam-suppressants and corrosion inhibitors to help keep the oil and engine clean. Additives can make up 20 to 25 percent of the liquid in a bottle of oil, so they play a major role in helping oil meet all of these requirements.

The additives are blended with various base oils and viscosity improvers to create a multi-viscosity oil such as 5W-20, 5W-30, 10W-30, etc. The first number in a multi-viscosity rating refers to the oil’s cold flow characteristics while the second number refers to it’s hot flow characteristics. A low number like 0 or 5 means the oil flows easily at low temperatures. A higher number like 20, 30, 40 or 50 means the oil retains its thickness and film strength better at high temperatures.

Most late-model engines are factory filled with 5W-20 or 5W-30 motor oil, but some require 5W-40, 0W-20, 0W-30 or 0W-40. Many European makes have very specific oil requirements, so for these applications it’s important to make sure your customer gets the “right” oil for their engine. Some oil suppliers have introduced special “Euro” formula motor oils that meet the specific requirements of various European makes.

It’s important to follow not only the OEM viscosity recommendations but also their performance requirements because using the wrong oil may lead to problems. Thinner viscosity oils are usually specified for engines that have tighter bearing clearances, variable valve timing and overhead cams. The OEMs also specify certain friction, heat, wear resistance, cleanliness and longevity standards (such as GM’s dexos) that must be met to keep their powertrain warranty in effect. If a product label doesn’t say it meets or exceeds the OEM specifications, it’s probably not the right oil for that application.

Many late-model vehicles have oil change intervals that can range from 5,000 to 7,500 miles, or up to 10,000 miles or longer if the vehicle uses an oil reminder system rather than a fixed mileage recommendation. The longer the drain interval, the more important it is to use a high-quality synthetic-blend or full synthetic oil with an additive package that can go the distance.

Most of the motor oils that are on retail shelves are formulated for modern engines and everyday driving. But, they may not be the best choice for an older engine that has a flat tappet camshaft. In recent years, the amount of anti-wear additive ZDDP (zinc dialkyl dithiophosphate) has been reduced because it can shorten the life of the catalytic converter. Roller cams and overhead cams don’t require as much ZDDP, so ZDDP has been lowered from 1,500 parts per million (PPM) to around 800.

If a low ZDDP oil is used in an older engine, particularly a high performance engine with a flat tappet cam and stiffer valve springs, the cam lobes and lifters may wear and fail. For these applications, recommend a ZDDP supplemental oil additive, or a performance oil that has been fortified with extra ZDDP.

General Motors Recognizes SKF As a Supplier Of The Year