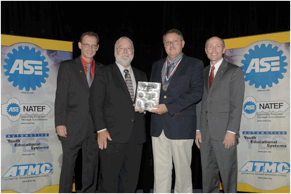 GRAPEVINE, Texas – National Pronto Association recently awarded the “Pronto Smart Choice ASE Master Automobile Technician of the Year” award to Robert Sowards, who is employed by Belden’s Automotive in San Antonio, Texas. The award ceremony was held Nov. 19 in Ft. Lauderdale, Fla., at the Hyatt Regency Pier 66. Bill Maggs, president and CEO of National Pronto Association, attended the awards ceremony to present the Technician of the Year Award to Sowards. Ronnie Belden, manager of Belden’s, also attended the awards ceremony as a guest of Sowards.

Belden’s is serviced by Pronto member Full Service Automotive in San Antonio, Texas. Sowards has spent 32 years as a professional service technician and has been employed by Belden’s for the past 25 years. Sowards said his position as the Corporate Shop Foreman not only lets him help customers with repairs, but he also is able to train other technicians. He added that he believes that ASE training provides him and other technicians with a sense of credibility and pride in what they do every day.

When asked by ASE why he decided to become a technician, Sowards stated that he worked in a local service station during high school, noting that, “Times were different back then … customers had high regard for those who worked on and repaired their cars.” When he realized he had the skills and knowledge to diagnose and repair vehicles and there were others who could not help, it was then he decided to become a technician, Sowards added.

The ASE Awards are presented each year by the National Institute for Automotive Service Excellence to select individuals who meet all criteria established by each sponsoring organization. National Pronto established the following set of criteria for the ASE Master Technician Award: the employing service center must be a current member of the Pronto Smart Choice program, candidate must be ASE Master Certified, candidate must have taken at least one exam in the last year and scored highest on cumulative test scores.