SPENCER, Iowa — Author Eric M. Johnson has released his new book "You Build a Business with People" detailing the rise of the well-known Iowa-based jobber Arnold Motor Supply. The book chronicles entrepreneur E.P. Arnold as he built his business from depression era Iowa through the 1970s. Today, the business has grown to include 60 locations across five states and employs more than 600 people. 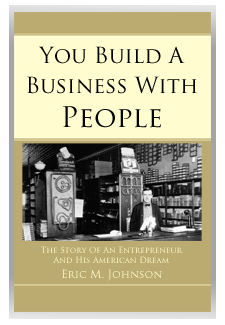 "You Build a Business with People" explores the concept of the American Dream as it existed in the early 20th century and how E.P. Arnold overcame obstacles through the depression and war years. “The majority of the book tells the story of Mr. Arnold. I wanted to put him in the context of the history," Johnson says. "The book is about him and what was going on around him at the time. It is relevant today because the challenges faced by Mr. Arnold are similar to those faced by entrepreneurs and small businesses today in a challenging economic environment.”

Johnson discusses the organization of Arnold Motor Supply as a partnership and the traits about Arnold that made him an effective leader and businessman. John R. Washbish, president and CEO of Aftermarket Auto Parts Alliance said, “As big as the automotive aftermarket is there’s a dearth of literature available about its history. Eric M. Johnson helps remedy this with his book ‘You Build a Business With People.’ It spins the tale of the Arnold Motor Supply stores and the ensuing Merrill Co. Mr. Johnson’s characterization of the visionary E.P. Arnold, who over the years sold the company to its employees, is fact-filled and fascinating.”

Eric M. Johnson has a Bachelor’s degree in economics and a Master’s degree in information systems. He and his wife live near Spencer, Iowa and have two teenage sons. "You Build a Business with People" is available on the author’s website, www.ericmjohnson.me or from Amazon.com.