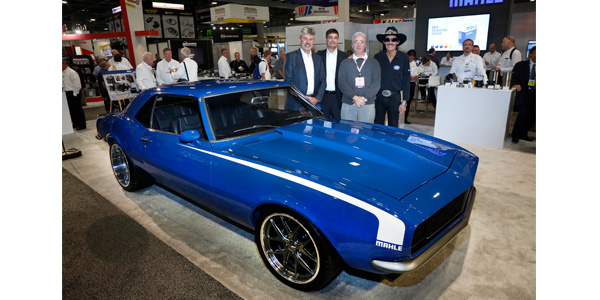 Martin Koschik of Highland, New York, a technician at J & J Automotive in Rhinebeck, New York, is the grand-prize winner of the MAHLE “Drive With the Original” promotion.

MAHLE awarded the grand prize of a resto-mod Petty’s Garage 1968 Camaro RS on the first day of AAPEX 2018 in Las Vegas.

The “Original” himself, Richard Petty, was on hand to present each of the finalists with the opportunity to draw a key from his signature cowboy hat – one of which unlocked the doors of the resto-mod, 625-horsepower Camaro RS.

“I never imagined a scenario where my key would actually turn when I put it in the lock. I put the key in, and when it turned, I knew instantly that my life had changed forever,” said Koschik right after winning the Petty’s Garage MAHLE Camaro. “When it got down to just me and one other finalist to see whose key would unlock the door, I thought, ’Holy cow!’ I actually asked if I didn’t win, could I just keep the key I had picked. It was just so exciting to be a part of such a special event, and I just want to thank everyone at MAHLE for making this possible.”

The four finalists were randomly selected from the nearly 70,000 entries submitted since the launch of the promotion last December. They received a trip to Las Vegas to participate in the grand-prize ceremony at the MAHLE Aftermarket booth.

“Everyone at MAHLE Aftermarket congratulates Martin for being the grand-prize winner of the Petty’s Garage MAHLE Camaro. He won an awesome car,” said Jon Douglas, president of MAHLE Aftermarket North America. “We also want to thank the other three finalists, as well as the thousands of other technicians around the country, for entering the 2018 ‘Drive with the Original’ promotion and placing their trust in the MAHLE brand.”

Koschik joined J & J Automotive, which performs general repair on domestic and imported cars, three years ago after having been a computer repairman for IBM. When he returned to the shop after winning the Camaro, Koschik said the reaction of his fellow technicians was unusual: “They just ignored me, acted like nothing had happened. Of course, it was just a joke.”