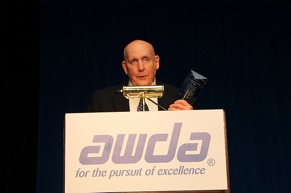 Details on a memorial service to be held at the Country Club at DC Ranch in Scottsdale, Ariz., are forthcoming.

The industry today is mourning the loss of an industry giant. Longtime industry veteran, widely regarded as an icon of the automotive aftermarket, John “Jack” F. Creamer passed away Wednesday, March 25, following a recent stroke.

Creamer was active in the industry, currently serving as vice chairman of the University of the Aftermarket Foundation at the time of his passing, among other industry endeavors.

Former president of the Automotive Warehouse Distributors Association (AWDA), Creamer was one of the founding creators of the Global Automotive Aftermarket Symposium, a leading executive education philanthropic event that carried on for nearly two decades and continues to raise thousands of dollars for aftermarket scholarships. In 2012, Creamer was presented with the Martin Fromm Lifetime Achievement Award by AWDA.

During his time at APS, Creamer served on both the AWDA and ASIA boards of directors. This experience gave him a taste for the association world and, in 1969, he left APS to join Martin Fromm and Associates (MF&A) in Kansas City as executive vice president. MF&A managed trade associations including several that still exist in one form or another: AWDA, the Association of Diesel Specialists, Council of Fleet Specialists and the Paint, Body & Equipment Association.

As director of member services for AWDA, Creamer was responsible for the development and execution of an extensive education program. In 1995, Creamer was named president of AWDA, serving as its chief staff person.

In 1978, Creamer founded Distribution Marketing Services, which he continued to operate at the time of his AWDA award in 2012. The company specializes in M&A activity, marketing and executive placement within the aftermarket. Creamer was often called upon to assist in financial deals being considered or undertaken by aftermarket companies. He also continued to serve as an adviser to the AWDA board.

In presenting the Lifetime Achievement award to him, Mort Schwartz, himself a 2003 Fromm Award winner, said of Creamer, “Jack’s commitment to the industry has been unshakable over many decades. He is a familiar face, a contributing member, a friendly and comforting presence…a true backbone of the aftermarket industry.”

Today, industry leaders offer their remembrances at his passing:

“Jack mentored countless industry executives, insisted that leadership included philanthropy and could spot a trend before most others,” commented Kathleen Schmatz, president and CEO of the Auto Care Association. “The industry will greatly miss him, especially his friends who will always remember his valuable advice and counsel. We will remember Jack as a good friend and a distinguished contributor to the auto care industry.”

John Washbish, president and CEO of Aftermarket Auto Parts Alliance, said, “Jack was the strongest supporter the independent aftermarket has ever known! He wanted everyone to win and to enjoy themselves while doing it. Jack was a champion of continuing education and exhibited his sincerity by serving on the University of the Aftermarket Foundation since ‘the beginning of time!’ He was a mentor to so many aftermarket individuals, including me, and provided solid advice, guidance and wisdom to many, many aftermarket suppliers and distributors. He was truly a great person and perhaps the most effective industry champion ever!”

“Jack Creamer was an icon in our industry and over the years had emerged as a senior leader we all looked up to and respected,” said Steve Handschuh, president and CEO of the Motor & Equipment Manufacturers Association (MEMA). “It wasn’t just Jack’s experience and knowledge of the industry, it was his kind way of treating all who came to him for advice and counsel. You got his undivided attention and gleaned the benefit of his insights and wisdom. I can safely say, I doubt there will ever be another Jack Creamer. He was one of a kind and will be missed by us all.”

Bill Long, president and chief operating officer of the Automotive Aftermarket Suppliers Association (AASA), the light vehicle aftermarket division of MEMA, commented, “Jack was like a father to many of us in the industry. Jack sat on the board of Echlin as I was coming up in the organization, and was always gracious to extend his friendship, provide candid coaching and help guide my career. He wanted to help people be successful. His comforting mannerisms provided our industry with sound leadership during times of challenge and prosperity. He touched almost everyone in our industry in a very positive way and his presence will be felt and remembered always. We have lost a good friend and mentor.”

Tim Kraus, president and chief operating officer of the Heavy Duty Manufacturers Association (HDMA), the heavy-duty division of MEMA, said, “All of us have considered Jack Creamer to be a leader in the industry for as long as I can remember. He is very much a part of the fabric of the automotive aftermarket. At most industry meetings and events, it was obvious that he was the ‘mayor’ of the aftermarket. He always had quality time available for everyone that approached him. His passing is very sad, a real loss for the industry.”

Private, family only funeral services are being held at 2 p.m. on March 27. Details on a memorial service to be held at the Country Club at DC Ranch in Scottsdale, Ariz., are forthcoming.