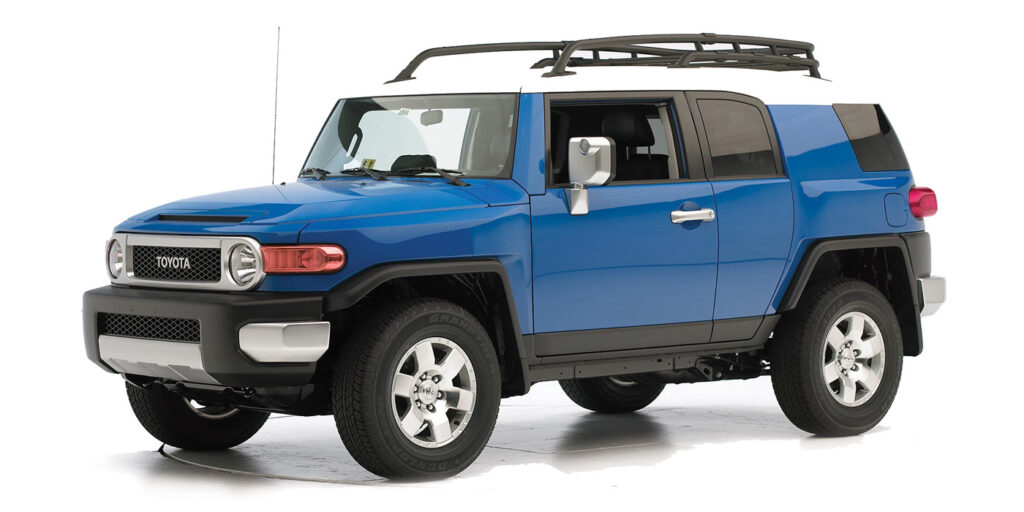 Toyota recommends using a very high-tech testing system to see if the water pump on a 4-liter V-6 (1GR-FE) has failed. It involves a paper towel and a weep hole.

If you see a lot of dried-up-looking pink coolant dripping down and around this water pump, you’re not supposed to panic. It could be normal, according to Toyota. You take a clean, dry paper towel and blot it around the edges of said weep hole and cross your fingers. If the towel comes out dry and clean, you’re in the money. But if it comes out wet and discolored, you’re out of luck (your customer is anyway).

Seeing as I was doing major surgery on my 2007 FJ Cruiser that required a timing-chain replacement, it was the perfect time to replace the old, crusty water pump with a brand-new one. I was going to have easy access to the pump with the front of the motor apart. This particular pump is a monster. It has 17 bolts to hold it on!

While generally reliable, the 1GR has many belt-driven accessories, from the fan clutch to the A/C compressor and the water pump. For increased cooling efficiency, the 1GR has four water passages. The extra cooling reduces cylinder hot spots and keeps combustion-chamber temperatures more uniform.

Replacing the water pump on this vehicle is moderately difficult because of all the components that need to be removed to have access. The fan-clutch runs off the pump and is driven off the crankshaft along with the other accessories. You have to take the fan shroud off, but you can leave the radiator in, which is what I did.

Coolant leaks on the 1GR-FE are typically due to corrosion and debris that run through the bearing surfaces. Keep in mind that if you notice heavy coolant deposits in the surrounding area, you should replace the pump. But, it also is wise to replace it when you have access to it, especially on a vehicle that has high miles, like mine with 156K on the clock. The old one was a little loose and slightly notchy.

The overall job wasn’t difficult, but it wasn’t trouble-free either. Somehow I didn’t get the gasket lined up correctly. With the bolts tightened down to spec and the serpentine belt finally installed correctly (it’s a good idea to print out the routing of the belt before you take it off), I fired the engine up with the new timing chain, water pump, belt and pulleys all for the first time.

But the thrill of victory was short-lived, as there was a leak. Of course, the misaligned gasket came back to haunt me. I tightened the bolts a little more, but I was afraid to strip them. I decided to loosen everything and try to align it better and also dabbed a little bit of RTV on the end where it was leaking. Toyota says it isn’t necessary, but I wanted extra insurance.

After a re-torque and a top-off of coolant, it came back to life with no leaks! Victory was mine at last, but with an old high-mileage vehicle, there will be more battles to fight down the road.