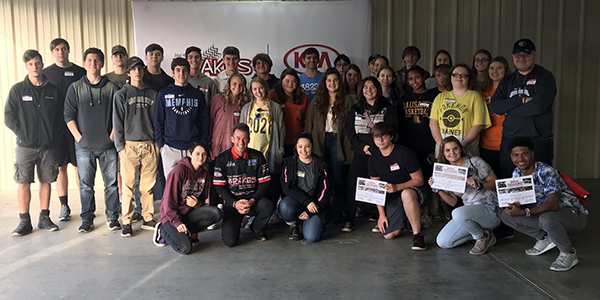 Teens got behind the wheel of modified KIA vehicles for hands-on instructions on how to avoid or react to major causes of accidents.

Parts Plus Top Fuel driver Clay Millican spent a rare off weekend from National Hot Rod Association (NHRA) competition to instruct Mid-South teens on driver-safety techniques during a series of four-hour classes hosted by B.R.A.K.E.S. (Be Responsible and Keep Everyone Safe) at Memphis International Raceway (MIR), according to a press release.

Parts Plus and Millican are staunch supporters of B.R.A.K.E.S., a 501(c)3 charity organization that provides free, hands-on classes through its Teen Pro-Active Driving School. Throughout the NHRA Top Fuel season, Millican coordinates his busy racing schedule to help B.R.A.K.E.S. to teach drivers aged 15 to 19 how to drive defensively to avoid accidents, the release continued.

B.R.A.K.E.S. was started in earnest by Millican’s former drag-racing rival, Doug Herbert, whose teenaged sons John and James were killed in an automobile accident in 2008. In August 2013, Millican lost a son of his own, 22-year-old pro-racer Dalton Millican, in a motorcycle accident near the family’s hometown of Drummonds, Tennessee, the release noted.

During B.R.A.K.E.S. classes the weekend of Oct. 20-21, local teens got behind the wheel of modified KIA vehicles for hands-on instructions on how to avoid or react to major causes of accidents: collisions, drop-wheel/off-road, distraction, panic stop and car-control/skid recovery, the release stated.

“My message to these kids was 100 percent personal,” Millican said. “I had a son who won a national championship in motocross racing and who became a Monster Truck driver. Dalton’s skill level was pretty high, so I tell these kids, ‘I don’t care how good a driver you think you are — it can happen to you.’ The teens who graduate from B.R.A.K.E.S. are about 64 percent less likely to be in a crash in their first three years of driving, so the more they can learn, the more armed they are to possibly avoid a life-threatening crash.”

Representatives from Memphis-based Parts Plus and its umbrella organization, the Automotive Distribution Network, were also on hand to assist in conducting free vehicle inspections for participants and those accompanying the teens to B.R.A.K.E.S. class, the release noted.

“There are more than 280 million vehicles on the road today, and about 80 percent are overdue for some kind of maintenance,” explained Mark Lowry, director of commercial sales/marketing for The Network. “Folks get caught up in day-to-day living, so it’s easy to overlook things like checking your oil and other fluid levels, monitoring tire pressure and staying aware of minor issues that could lead to big problems down the road. Clay is doing his part, and as a member of this community, Parts Plus felt it was important to offer this free service as part of the B.R.A.K.E.S. classes this weekend in Millington.”

Personnel from the Millington City Fire Department also demonstrated the Jaws of Life device, which is used to pry drivers from vehicular wreckage, explained what to do in the event of a serious accident and offered tips on how to avoid serious road mishaps, the release concluded.

Advertisement
In this article:Automotive Distribution Network, NHRA, Parts Plus

Education: What’s That Smell Telling You About Your Vehicle?

Opinion: No Asterisk With The Counter Pro Of The Year Award 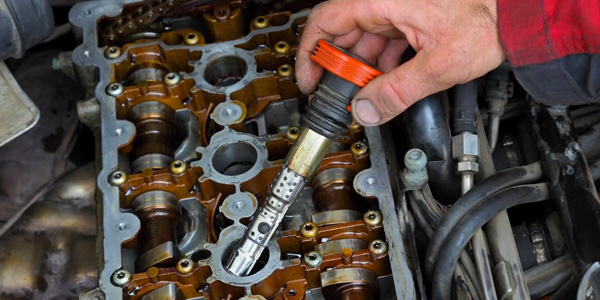