HARTFORD, Conn. – Permatex has announced it will continue its longtime sponsorship of the Follow A Dream Race Team as the team’s corporate sponsor for the 2014 NHRA Championship Top Alcohol Funny Car Series. 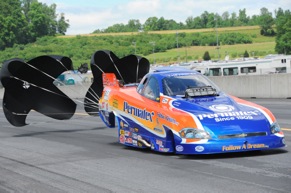 World’s First 2014 Camaro Funny Car
The Permatex Follow A Dream Race Team will challenge the 2014 NHRA series with a brand new racecar, a 2014 Chevrolet Camaro. It will debut as the world’s first 2014 Camaro Funny Car and will feature a brand new 2014 Murf McKinney Chassis. Veteran driver Todd Veney, an experienced and successful NHRA racer and motorsports journalist, who joined the team in 2010, will be in the driver’s seat. He will help the team compete in 12 races this year, across the United States, eight of which are national events.

Jay Blake, founder, owner and crew chief of Follow A Dream, commented, “This year we will be running a 2014 Murf McKinney chassis with a Chevrolet Monte Carlo body for the open races in March. We’re working with Chevrolet to debut the new Camaro body in the spring. We’re all very excited for the 2014 season. Tommy Howell’s been hard at work fitting the new chassis, and we can’t wait to get out and start testing.”

Information and updates on the Follow A Dream Team’s lead up to the season can be found on Facebook at www.facebook.com/FollowADreamRacing.