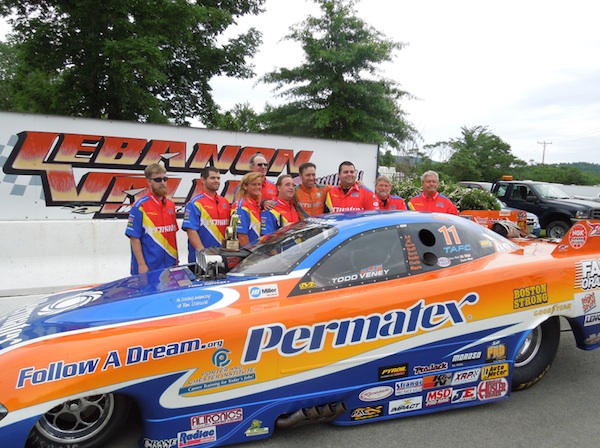 A season full of excitement and challenges
Opening 2013 with back-to-back late-round finishes in Gainesville, Fla., the team reached the semifinals at the Lucas Oil regional event in February and the final at the Gatornationals in March. That event generated tremendous TV time on ESPN as the Permatex/Follow A Dream crew replaced the engine and almost completely rebuilt a new one following an explosion and fire in the semifinals. The cameras kept rolling as the crew completed the rebuild and weaved its way through the pits and staging lanes and arrived at the line with literally a minute to spare.

The team qualified No. 3 at the Maple Grove regional over Memorial Day weekend and made its best runs of the year, 5.58 and 5.56, in quarterfinal and semifinal wins. Veney went up in smoke in the final against eventual national champ Frank Manzo.

At midseason, the Permatex/Follow A Dream Team came up with its most dominant performance in years, sweeping the East regional at Lebanon Valley Dragway in upstate New York with low e.t. and top speed of qualifying and all three rounds of eliminations. After pacing the field with a 5.639 at 254.87 mph, Veney put away John Headley in the first round, Eric Louie in the semi’s, and, with low e.t. of the meet, 5.637, John Anderika in the final to move to sixth place in the national standings.

A season of worthy highlights
The team made the 2013 ALLSTARS squad and nearly won the invitation-only ALLSTARS race in Chicago, which is open to the top two drivers in each of four regions. Follow A Dream, representing the Eastern U.S., defeated Chris Foster in the quarterfinals and Steve Gasparrelli in the semifinals before dropping the final against Dale Brand by the almost invisible margin of 12-thousandths of a second.

With a final-four finish at Maple Grove, the team wrapped up a solid season that included its biggest win in years, four finals, a semifinal or better finish at most races, two low e.t.s, two top speeds, two No. 1 qualifiers, and another Top 10 finish in the final NHRA rankings.

Many motivational and celebrity events
In between races, and often to and from while crisscrossing the country, Jay Blake spoke to crowds of all sizes at nearly 30 engagements and over a dozen separate car displays. He was featured on NBC, ESPN, and local affiliates. After the final race of the season at Maple Grove where the team reached the final four, Jay Blake was featured by Philadelphia’s Channel 17 on a newscast, which can be accessed here.