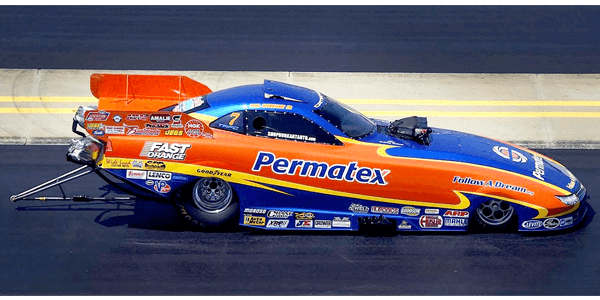 The team is eager to improve on 2nd place finish in the 2016 Eastern Region.

HARTFORD, Conn. — Permatex, a leading innovator in chemical technology for automotive maintenance and repair, will continue its perennial sponsorship of the Follow A Dream Race Team as the team’s corporate sponsor for the 2017 NHRA Championship Top Alcohol Funny Car Series. This year marks the 13th consecutive season that Permatex has partnered with Jay Blake and his Follow A Dream Race Team in the NHRA series. As the Follow A Dream team enters the new season on the heels of a 2nd place finish in the Eastern Region in 2016, the team hopes to parley the positive side of ‘lucky 13’ with some solid car preparation and teamwork throughout the 2017 challenge. 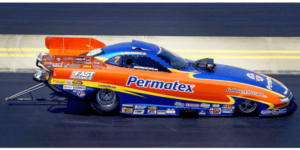 The Permatex Follow A Dream Race Team will compete in the 2017 NHRA series with veteran driver Phil Burkart behind the wheel. Burkart joined the Follow A Dream team as the full time driver in 2016. He will help the team compete in 14 races this year, across the United States.

Veteran, Anthony Terenzio, will also continue as the team’s tuner. Terenzio joined the team in 2016 season after the retirement of long time tuner Tom Howell.

Follow A Dream Race Team is a remarkable story in itself, and winning at the national level is only part of it. Follow A Dream’s owner and crew chief, Jay Blake, is totally blind. Jay lost his eyesight in a tire explosion over 20 years ago, but he did not lose his positive attitude on life, nor his desire to pursue his dreams. Jay had always wanted to form his own race team, and in spite of his serious setback, he continued to focus on his goals. Through years of incredible determination and perseverance, he was able to realize his dream and founded Follow A Dream Racing. Since then, the team has worked its way up the rankings to become one of the top Funny Car teams in the world.

Jay Blake’s mission to motivate others

While he has worked incredibly hard to build his team, Jay Blake has also worked to encourage others to overcome adversity. He has toured the country as a motivational speaker at community schools, vocational institutes, corporate events, social club gatherings and hospitals, encouraging people to believe that they can rise above adversity and achieve their life’s goals.

Permatex is a leading manufacturer, distributor, and marketer of premium chemical products to the automotive maintenance and repair markets. Since 1909, Permatex has been an acknowledged leader in the development of innovative new products and services for the automotive aftermarket. Permatex markets a wide range of products under well-known ITW brand names such as Permatex, Fast Orange, Spray Nine, the Right Stuff, Gel Twist, Ultra Bond and Dr. Bond, Ultra Cherry, and Grez-Off.

Permatex currently operates in the United States, Canada, Mexico, and the U.K. and exports products to more than 85 countries around the world. North American operations include Permatex’s headquarters in Hartford, CT and a state-of-the-art manufacturing, distribution and technical center located in Solon, OH.

Permatex is a division of ITW (Illinois Tool Works Inc.), a US based, NYSE listed corporation, founded in 1912. ITW is a Fortune 200 diversified manufacturing company.

*Schedule is tentative and subject to change.

Advertisement
In this article:Follow A Dream, Jay Blake, NHRA, Permatex

Aftermarket: Average Age Of Light Vehicles In US Hits 11.9 Years

Advance Calls On Fans To Create 'Start Your Engines' Videos