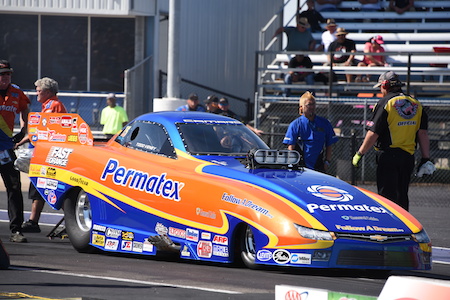 Three wins during the season, with two of them back-to-back, and strong performances throughout the year helped the Permatex/Follow A Dream Team tie the team’s best season ranking in its 16-year NHRA history. 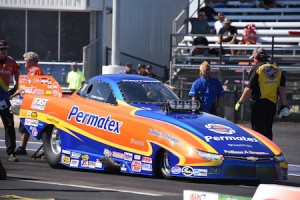 HARTFORD, Conn. — The 2015 Permatex/Follow A Dream Team, sponsored by Permatex, has completed one of its most successful NHRA campaigns at the top of its game with 2nd place regional and 7th place finishes in the NHRA Top Alcohol Funny Car standings. Three wins during the season, with two of them back-to-back, and strong performances throughout the year helped the Permatex/Follow A Dream Team tie the team’s best season ranking in its 16-year NHRA history.

The Permatex/Follow A Dream Team won two consecutive races during the season, at the Summit Racing Equipment Nationals in Norwalk, OH and at Lebanon Valley Dragway in West Lebanon, N.Y., respectively, and notched a third win at Virginia Motorsports Park in Petersburg, Va. The team was very competitive for the rest for the season ending just four points shy of a Top 5 national finish.

“One more round-win anywhere during the year, and we would have had our first Top 5. But everyone except the world champion looks back on the season and wishes they’d won one more round somewhere,” said team Driver Todd Veney.

“We’re a little disappointed about how our year ended after such a successful start,” said Permatex/Follow A Dream Team Owner/Crew Chief Jay Blake. “After winning three races during the year, you want to come away with your best finish ever, but we couldn’t quite get there. But we’re excited to get back to work next season and improve even more.”

About Follow A Dream
Follow A Dream Race Team is a remarkable story in itself, and winning at the national level is only part of it. Follow A Dream’s owner and crew chief, Blake, is totally blind. Jay lost his eyesight in a tire explosion more than 18 years ago, but he did not lose his positive attitude on life, nor his desire to pursue his dreams. Jay had always wanted to form his own race team, and in spite of his serious setback, he continued to focus on his goals. Through years of incredible determination and perseverance, he was able to realize his dream and founded Follow A Dream Racing. Since then, the team has worked its way up the rankings to become one of the top Funny Car teams in the world.

Jay Blake’s mission to motivate others
While he has worked incredibly hard to build his team, Blake has also worked to encourage others to overcome adversity. He has toured the country as a motivational speaker at community schools, vocational institutes, corporate events, social club gatherings and hospitals, encouraging people to believe that they can rise above adversity and achieve their life’s goals.