Radiator: The Heart of a Vehicle’s Cooling System 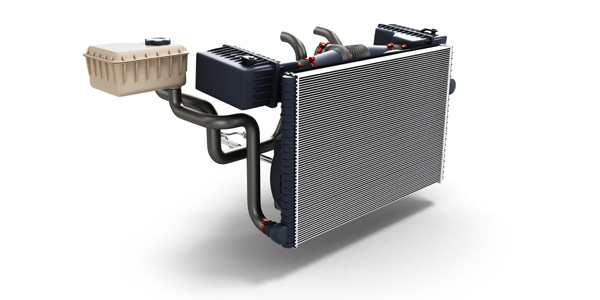 Today, most radiators use aluminum cores with plastic headers to save cost and weight. Aluminum-plastic-style radiators are more prone to failure and can’t be repaired as easily as copper-brass, but they’re more efficient.

A thermostat controls the temperature of the coolant by opening or closing when the engine warms up. As pressure builds in the system, an overflow tank catches any boil-over that may occur before the thermostat opens. If coolant vaporizes, it can cause the engine to overheat or create hot spots.

Overheating can cause a blown head gasket or cracks to form in the cylinder head or block. There may be little or no warning of an overheating situation if steam creates vapor pockets around the temperature sensor, which can lead to a major boil-over.

Opening a hot radiator too fast may cause a dangerous boil-over that spits out scalding hot coolant and high-pressure steam. This is why most radiator caps have a mechanism to help relieve the internal pressure before the cap can be fully opened.

On a cold engine, the thermostat stays closed until the engine warms up, which is faster and creates fewer emissions. A small bypass hose allows the thermostat to sense when the temperature is optimum and will open up and let coolant flow through the radiator.

Since the development of aluminum or mixed-metal engines, corrosion inhibition has become even more critical than antifreeze for all seasons and regions. As the coolant runs through the system and the small radiator tubing, it builds up with scale that may block off passages or allow debris to move into other parts such as the water pump.

A stuck thermostat is one of the biggest causes of failure if it sticks in the closed position and doesn’t allow coolant to circulate. Small leaks from pinhole corrosion or broken solder in the radiator is another cause of cooling-system failure. Rocks and debris kicked up from other vehicles also can break the small cooling tubes on the radiator, allowing steam to release and creating a boil-over as the coolant level drops.

To find leaks in the system in either the radiator, hoses or cap, a pressure test should be performed that applies a certain amount of psi to inspect the system. The seams on plastic header tanks and the neck of the cap are prone to cracking, so pay particular attention to those areas.

Most pressure-testing kits have an adaptor for the radiator cap so it can be pumped up to the correct pressure. If the system doesn’t hold pressure and there isn’t a noticeable leak, it could be an internal crack in one of the water passages.

Milky oil in the radiator is a sign of a blown head gasket. Coolant that escapes through the exhaust also is a sign of head-gasket failure and sometimes can be detected by smell or a misfire. Make sure you know the signs of radiator and cooling-system failure so you can instruct the customer what to look for and to determine whether minor or major surgery is necessary. In the meantime, be sure to have plenty of hoses, caps and clamps as well as the right coolant for the application whenever the temperature rises.