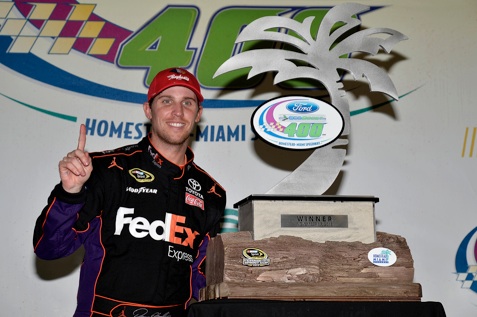 MCHENRY, Ill. — Sidelined for four races with a broken back earlier in the season, Denny Hamlin took the checkered flag in Sunday’s Ford EcoBoost 400 at Homestead-Miami Speedway. Teammate Matt Kenseth was close behind, and took second place at the season’s final race. Both JGR drivers drove under the stopping power of Raybestos brakes.

The victory is Hamlin’s first of the season, the second time at Homestead and the 23rd time in his career. The driver of the No. 11 FedEx Express Toyota has won at least one race in each of his eight full seasons in the NASCAR Sprint Cup Series.

Kenseth scored a career-best seven race wins in his first season with JGR. He was the No. 1 seed entering the Chase for the NASCAR Sprint Cup and led the standings for six of the playoff’s first seven weeks.

Kenseth finishes the 2014 Chase for the NASCAR Sprint Cup Series Championship in second place, and teammate Kyle Busch finished the season fourth in the standings, which is a career-best.

Raybestos Racing calipers make up the strongest and lightest caliper package currently available in all of NASCAR. They have an optimized structure caliper architecture design and a mono-block aluminum alloy construction. They also include integral crossover cooling and progressively sized titanium pistons.

The lessons learned on tracks like Miami are continually translated into product improvements across the entire Raybestos product line, which includes racing, street performance, police patrol/pursuit vehicles and heavy-duty trucks.

For more information on the Raybestos Sprint Cup braking system, or for questions on any Raybestos brand brakes, visit www.RaybestosBrakes.com or call 800-323-0354.