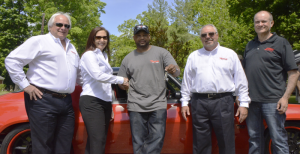 Brian Williams of Lynchburg, Va., is the grand prize winner of the Raybestos Camaro Sweepstakes and celebrated the arrival of his classic car with a cookout with family and friends on May 9.

MCHENRY, Ill. – After appearing in Las Vegas and touring North America, the Raybestos 1971 Chevrolet Camaro RS “G-Machine” has reached its final destination: the driveway of Brian Williams of Lynchburg, Va. Williams, the grand prize winner of the Raybestos Camaro Sweepstakes, celebrated the arrival of his classic car with a cookout with family and friends on May 9.

“It was great to see the look on Brian’s face when Jeff drove the Raybestos Camaro into his driveway. Ever since he was awarded the Camaro at AAPEX, he has been looking forward to taking it for a spin around the neighborhood,” said Grons. “We want to thank Brian for sharing his special day with us. We had so much fun with the Raybestos Camaro sweepstakes, we are going to do it again with another classic car, so stay tuned.”

Williams was awarded the Raybestos Camaro at the Brake Parts Inc booth during the 2014 Automotive Aftermarket Products Expo (AAPEX) Show on Nov. 3, 2014, in Las Vegas. Before traveling to Lynchburg for final delivery, the one-of-a-kind custom car made several stops across the U.S. and Canada.

Marketing: MAHLE Motorsport To Sponsor All SEGA Classes For 2022

Raybestos Camaro Heads Home After Tour Across The U.S.