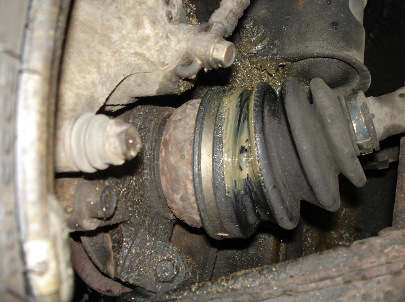 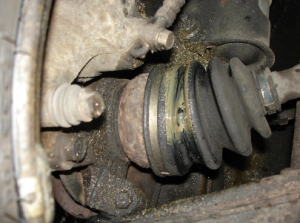 Constant-velocity (CV) joints have been around since the 1980s when front-wheel drive (FWD) came into widespread use.

Although some rear-wheel drive (RWD) and all-wheel drive (AWD) vehicles also use CV joints, most are found on FWD cars and minivans. CV joints are used instead of U-joints because they allow the joint to bend at a wider angle without inducing driveline vibrations. When a U-joint operates at an angle of more than a few degrees, it causes the speed of the shaft to vary.

A steel cage holds the balls in position. Over time, the windows in the cage can become worn allowing the balls rattle and pop when the vehicle is steered to the left or right. This produces a clicking or popping noise that is a classic symptom of a worn CV joint. Wear or damage in the ball grooves or on the polished balls can also produce noise and play in the joint. CV joints are lubricated with special high-temperature CV joint grease, similar to wheel bearing grease.

The joints can last a long time provided the protective rubber or plastic boot that surrounds the joint remains intact and doesn’t leak. The No. 1 of premature CV joint failure is usually a torn, cracked or leaking boot. Even a small pinhole or hairline crack will allow grease to be lost from the joint due to the centrifugal force generated by the rotating joint. Loose, broken or missing boot clamps also can allow the boot to leak. Dirt and water also can enter a leaky boot and cause wear and corrosion.

By the time the leaky boot is discovered, many CV joints are badly contaminated or worn and need to be replaced. CV joints and boots can be replaced individually, but most professional technicians and even do-it-yourselfers prefer to replace the whole halfshaft assembly with a remanufactured shaft. Reman shafts are preassembled and ready to install. Some shafts have new CV joints while others have reground joints with oversized balls.

Either way, a reman shaft is a much faster, easier and less messy way of replacing a bad boot or CV joint. There’s also less chance for installer error and comebacks with a preassembled shaft. On a high-mileage vehicle with a bad CV joint or boot, it’s often a good idea to replace both shafts at the same time. Often, the right (passenger side) shaft fails first because right turns are at a sharper angle than left turns, and right turns are more common than left turns. Consequently, the right outer CV joint and boot are the first to go. Special tools that may be needed to replace a shaft include a hub puller to separate the outer CV joint from the steering knuckle and wheel bearing and/or a hydraulic press for older Asian car applications with press-fit wheel bearings.