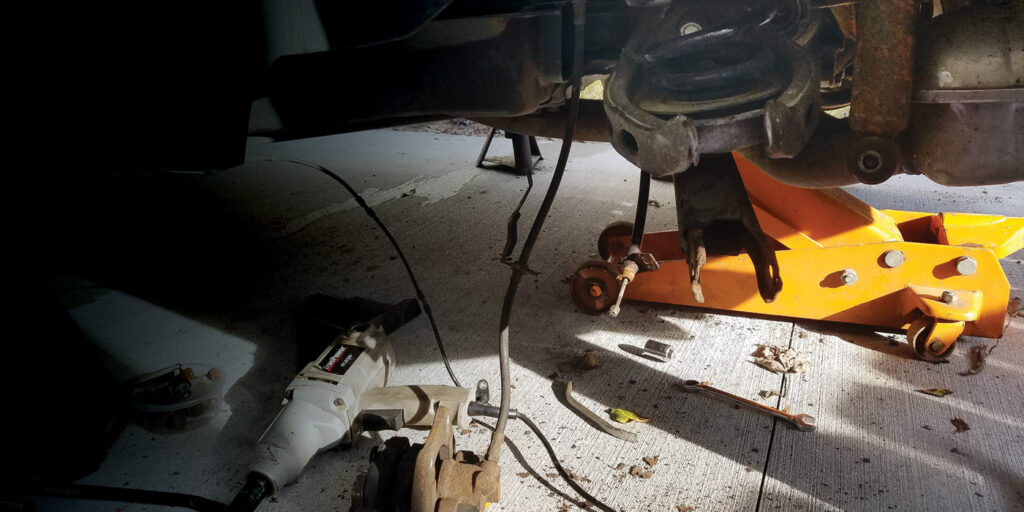 There are several reasons why a motorist might change their front or rear control arms or trailing arms. Worn-out bushings, rust or integrated ball joints are a few. But sometimes, circumstances dictate replacing whole units rather than individual parts.

In a recent situation that required a new trailing arm, I initially had an ABS/traction-control code pop up on my wife’s BMW. She said that the dash looked like a Christmas tree, which is always a bad sign. I test-drove the car and tried to cycle the key a few times to no effect. The issue was going to require further investigation.

A month or so before this, I had replaced the rear brake pads and resurfaced the rotors. When I popped the rear wheel off, I noticed a significant amount of rust around the axle nut that the BMW logo cap usually covers when the wheel is on the vehicle. The axle nut appeared to be flaking off on the sides with rust. At the time, I didn’t think this was a big deal because I didn’t plan to remove the axle. I cleaned it out the best I could and moved on.

But, no good deed goes unpunished. Now the ABS and EPS lights were on. I suspected it was coming from the left rear, but I needed to confirm which wheel was the problem. I borrowed a scanner that could read the ABS wheel-speed sensors as I drove down the road, and sure enough, the left rear sensor was dropping out of range.

At this point, my diagnosis pinpointed the wheel-speed sensor, which was an easy enough replacement. I removed the sensor but suspected that the reluctor ring at the end of the axle encased inside the rear trailing-arm housing might have some rust jacking, causing an erratic reading.

No problem. I decided that the axle was in good shape and would only need a new reluctor ring. With a new ring on order, I went about removing the rear CV axle. I was concerned about the rust on the rear axle nut at this point but had enough heat, hammers and die grinders to remove it. Eventually, I was able to cut it off with a carbide bit. I thought I was home-free.

After removing the bolts on the inner CV joint and making sure there was enough clearance to pull it out, I tried to use a punch and hammer to knock out the axle from the wheel hub. That didn’t work. I went to my local parts store and rented a puller attached to the hub to drive out the axle with a large center bolt. That didn’t work either. I tried several impact guns and breaker bars with heat, and still, nothing.

I was beginning to lose hope. I used an induction heater, thinking that I could get it glowing red hot and break the rust lock. But that wasn’t working either. Every tech finds his or her self in this situation at some point, where everything you’ve tried isn’t making a difference. So I decided to get a new axle with a new reluctor ring and just do my best to hammer out the old one. I couldn’t get it to budge no matter what I tried.

There was a sinking feeling when I realized the only way to remove this thing and fix the problem was to remove the whole trailing-arm assembly. It was my last resort. Fortunately, I was able to locate a salvaged unit from a local salvage yard for $80. It was a massive arm that included the hub and a wheel-speed sensor.

I knew that I had to mark the lower control-arm cam bolt’s locations and do my best to mark the upper mounting bracket as well, so the alignment wouldn’t be too far off. After rolling around on a creeper in my driveway in the middle of winter and fighting through snow, I finally got the new axle and trailing arm installed. The Christmas-tree lights went off, and traction control was back to normal.

It felt like I had finally won the fight. The lesson learned from my perspective is that you don’t want to block your third car in the driveway when you attempt to resuscitate your wife’s car. I had to give up my vehicle for a few weeks while I grappled with what to do and when the weather would cooperate enough to make the repairs. But victory is sweet after you win battles like these.