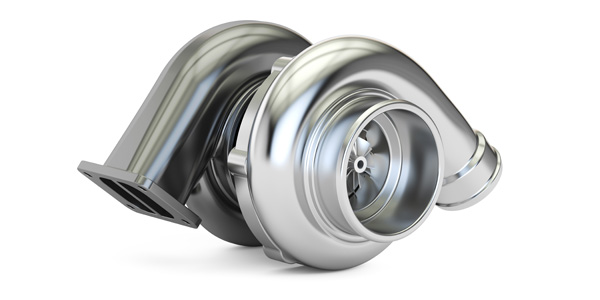 They’re back in vogue – and they’re smaller and more efficient than ever.

Turbos can produce more power by cramming a higher volume of air and fuel into the combustion chamber. Early turbocharged engines were not very fuel-efficient, but when the exhaust finally spooled up the compressor wheel, they generated a lot of horsepower!

Turbochargers have been used for decades. World War II aircraft used turbos so they could fly at high altitudes with no loss of performance (but they did require lots of fuel). The air becomes thinner at high altitude, giving a turboprop engine much better power. They can maintain sea-level air-fuel ratios and outperform a normally aspirated engine. Turbocharged aircraft engines initially were designed to make similar power at higher altitudes as sea-level, but it was soon discovered that the engines could produce more power at all altitudes due to the ram-air effect.

While aircraft pioneered the use of turbos, the real benefits came when they were fitted to automobiles. However, turbos presented a few challenges for automakers, as the early models produced too much lag time before the compressor built enough boost pressure to make power. Many automakers shelved the use of turbos until about a decade ago, when Ford, GM and others designed smaller-displacement engines with turbos to take the place of larger engines, without the fuel penalty of additional cylinders or volume.

In effect, an engine is an air pump, and a turbo is like a fan blowing extra air into the system.

Since the introduction of downsized turbocharged engines, there’s been an evolution of electronics to control the air and fuel today. The use of smaller turbos offers better throttle response because they don’t suffer from lag like a bigger turbo that needs more exhaust pressure to spool up. Some of these engines use twin turbos to reduce turbo lag and increase performance. One example is Ford’s V6 EcoBoost engine that puts out as much power as the bigger-displacement V8s but gets better fuel economy.

Instead of using oversized turbos to make lots of horsepower at high rpm, OEMs shifted their philosophy to smaller turbos that rev as high as 250,000 rpm to reduce lag and create power at lower speeds. OEMs also use multispeed transmissions to help keep their engines in the best operating range, so the turbo is always spooled up with boost pressures ranging from 9 to 11 psi.

A turbocharger improves the overall thermal efficiency of an engine by using waste heat that normally would go out through the tailpipe. Turbos also are more efficient than a belt-driven supercharger, which can use up 40 to 50 hp just to run the blower. Some manufacturers experimented with twincharger (a turbo and supercharger) setups, but they’re very complicated to control.

With turbos installed on nearly 25% of new cars today, industry experts believe the number could climb higher than 50% in the next five years. One thing to keep in mind is that a high-revving turbo needs clean oil and regular oil changes to work correctly. Consequently, customers who neglect maintenance may run into more than turbo lag down the road.

Return of the Turbochargers