Rotating electrical parts such as starters and alternators often have to be replaced on older, high-mileage vehicles. Fuel injection has helped prolong the service life of starters by allowing engines to start more quickly when they are cranked. Consequently, starters last longer and have to be replaced less often. Such is not the case with alternators. Higher electrical demands on the charging systems in most late-model vehicles combined with high underhood temperatures has helped increase heat-related alternator failures. 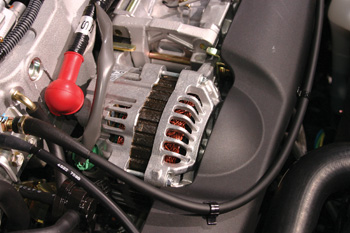 Starter Troubles
A starter that’s failing may crank the engine too slowly for a quick start, or it may not crank the engine at all. Often, the problem is not the starter but a low battery or a loose or corroded battery cable connection. So, one of the first things that should be checked is battery charge and condition.

A good battery should be capable of accepting and holding a charge from a battery charger, and should be at least 75 percent charged (12.5 volts or higher when checked with a digital volt meter with the engine and ignition off and no load on the battery). If the battery’s voltage is low and it doesn’t take a charge, your customer needs a new battery, not a starter. Load-testing the battery or using a conductance tester to check its ability to take and store a charge can also confirm the need for replacing the battery.

The average service life of a car battery is only about four to five years, and can be shorter in hot climates. So also consider the age of the battery when evaluating its condition.

If a DIY customer is not sure what might be causing his cranking problem, offer to bench-test his old starter. If the starter tests good, the slow-cranking or no-cranking problem is obviously something other than the starter. He should check the battery, battery cables, starter relay (if his vehicle has one) and the starter circuit and wiring connections for possible faults. If the starter tests bad because the cranking RPMs are too low, excessive current draw or it fails to spin at all, you can sell your customer a new or remanufactured starter with a high degree of confidence.

Excessive starter draw can be caused by high resistance within the starter itself, worn brushes, or grounds or opens in the armature or coil windings. It can also result from increased internal friction due to shaft bushings that bind or an armature or magnets that are rubbing inside the starter.

A loose starter may crank an engine slowly, noisily or not at all. Loose bolts will make for a weak ground connection. The starter may also flop around, slip, chatter or fail to engage depending on how loose it is.
Sometimes a starter will spin but won’t crank the engine. This is usually an engagement problem due to a weak solenoid or a defective starter drive. A starter drive that is on the verge of failure may engage briefly but then slip. The starter drive has a one way overrunning clutch mechanism that you can check once the starter is out of the car (and replace if necessary). The drive should turn freely in one direction but not in the other if good. A bad drive will turn freely in both directions or not at all. If a drive locks up, it can over-rev and destroy the starter.

Charging Problems
The first sign of trouble when an alternator is failing (or has failed) is a low or dead battery. On a late-model vehicle, that can not only cause a no-start but also can cause the loss of “learned” data in the powertrain control module and other modules throughout the vehicle. In some cases, certain modules may not regain their normal function after the battery has been recharged and/or the charging problem repaired because the module requires a special relearn procedure (which may require using a scan tool to reset or reinitiate the module).

The output of the charging system on a vehicle can be checked with a digital voltmeter while the engine is idling. A charging system that is working properly should produce a charging voltage of somewhere around 13.5 to 14 volts at idle with the lights and accessories off (always refer to the vehicle manufacturers specifications). When the engine is first started, the charging voltage should rise quickly to about two volts above base battery voltage, then taper off, leveling out at the specified voltage.

If the alternator tests bad, your customer needs a new or remanufactured replacement alternator. You might use the opportunity to recommend a higher-output alternator if the customer’s vehicle is equipped with a megawatt aftermarket sound system or other high-load electrical accessories.

If the wiring checks out okay, the problem could be in the voltage regulating circuitry inside the powertrain control module. On many late-model vehicles, charging output can be varied depending on operating conditions as well as electrical load. Problems with other sensor inputs or a defect in the control module itself may prevent the alternator from charging properly.

A slipping drive belt is another common cause of undercharging, especially with V-belts on older vehicles. Serpentine belts usually provide a better grip, but if the automatic tensioner is weak or stuck it can allow the belt to slip under load. Glazed streaks on the belt or belt noise when high-load electrical accessories are turned on with the engine idling can be signs that the belt is slipping.

Alternator slippage and undercharging can also be caused by a bad alternator pulley. Overrunning Alternator Pulleys (OAP) are used on a number of late-model import and domestic vehicles. OAP pulleys have a one-way clutch inside the center of the pulley that slips and allows the pulley to free-wheel when engine speed suddenly drops. This reduces noise, vibration and harshness in the belt drive system, but may cause a charging problem if the clutch slips when it should be gripping.

Another type of pulley is the Overrunning Alternator Decoupler (OAD) pulley. This type of pulley combines a one-way clutch with a torsion spring to decouple and absorb torsional vibrations in the belt drive system. This provides much quieter and smoother operation than either a solid pulley or an overrunning alternator pulley, especially at lower engine speeds (from idle to about 1,500 RPM). But it also can cause slipping and charging problems if the clutch or decoupler spring is defective.

Solid pulleys are usually just mounted on the alternator shaft with a light press fit and are held in place with a large hex nut and washer on the end of the shaft. By comparison, OAP and OAD pulleys are usually threaded onto the alternator shaft and require a special splined tool that fits inside the pulley to remove them. A small protective cap on the outside of an OAP or OAD pulley also has to be pried off to change the pulley.

When a new or remanufactured alternator is installed on a high-mileage vehicle, recommend a new drive belt too. Original equipment belts made of EPDM synthetic rubber are high-mileage belts capable of lasting upward of 100,000 miles. Unlike older belts made of less durable rubber, they don’t crack with age. But they do wear. It’s difficult to see how much the grooves on the underside of the belt may be worn, so belt manufacturers have created special belt wear tools that can check the depth of the grooves to reveal how much they are worn.

The operation of the automatic belt tensioner also should be checked to make sure it is working correctly and is capable of maintaining proper belt tension. Rust and corrosion can cause old tensioners to bind, and a weak or broken spring may prevent it from keeping the belt tight.