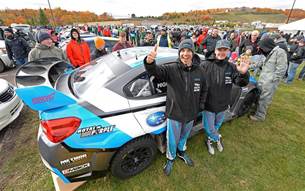 The two Subaru Rally Team USA drivers dominated the season early on, experiencing their greatest challenge during the New England Forest Rally where David Higgins and co-driver Craig Drew defended their winning streak against stiff competition from Ken Block and Ramana Lagemen. In that race Higgins secured a five-second lead in his 2015 Subaru WRX STI during the first stage, which led to their continued victory.

In the eighth and final race of the series at the Lake Superior Performance Rally, Higgins and Drew were in top form ultimately finishing two minutes ahead of the race’s runner up, Adam Yeoman and Jordan Schulze of FY Racing.

“It was a heck of a long weekend,” said Higgins. “It is amazing to do what we have done, but you can only do it with a great team that we have. Craig has been awesome as always and we have been on a good winning streak for a long time, but this one was special. Stages were in good condition and for us the big task was to bring it home. Great job by the team and I’m proud we matched John Buffum’s record.”

“We are extremely proud of David and Craig’s determination during the Rally America National Championship. It is exciting to see Royal Purple’s products help our racers outperform the competition and achieve such a remarkable feat,” said Debby Neubauer, Royal Purple’s Vice President of Marketing.

For more information on Royal Purple’s involvement in U.S. rally racing, or Royal Purple’s full line of performance lubricants and chemical products for use in street and race vehicles, please visit www.RoyalPurple.com or call (888) 382-6300.