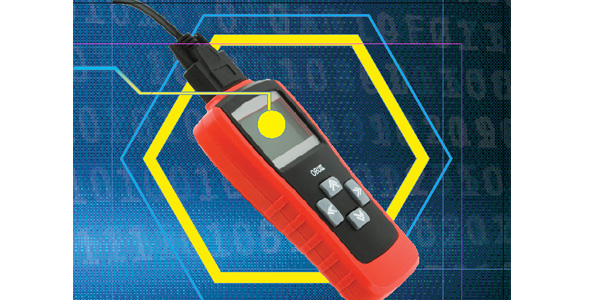 Some type of scan tool has been essential for engine diagnostics since the arrival of computerized engine controls back in the 1980s.

Some type of scan tool has been essential for engine diagnostics since the arrival of computerized engine controls back in the 1980s. Prior to model year 1996, onboard diagnostics was a real challenge for do-it-yourselfers as well as independent aftermarket repair shops because every vehicle manufacturer had their own unique diagnostic connectors, trouble codes and scan tools. This meant you either had to buy a dedicated scan tool for a particular vehicle (typically an aftermarket version of the OEM scan tool with fewer functions), or an aftermarket scan tool with a box full of cable adapters and data cartridges for the vehicle or vehicles you wanted to diagnose.

Then, the industry did something that made absolute sense. The automakers and the Society of Automotive Engineers (SAE) came up with a standardized 16-pin diagnostic connector that would be used on all makes and models of vehicles. They also developed a list of standardized “generic” or “P0” fault codes for all vehicles. However, they also allowed automakers to add their own unique “enhanced” or “P1” make/model-specific codes for advanced diagnostics. This is how OBD2 diagnostics and scan tools came to be back in 1996.

In the years since, there have been successive generations of relatively inexpensive DIY entry-level scan tools. The most basic of these are inexpensive “code readers” that display generic P0 OBD2 fault codes with a short code definition. Most code readers will not read “P1” vehicle-specific enhanced codes, and they lack the ability to display live sensor data or other PIDs.

A basic code reader is a useful tool for pulling a code, but they don’t offer anything beyond that. A fault code by itself is not a diagnosis and it does not tell you which part or parts may need to be replaced. The code only identifies the nature of the problem so further testing and inspection can be done to isolate the fault.

The next step up is a basic scan tool that can read both generic P0 and enhanced P1 codes. It can display the status of the various OBD2 system monitors, which tells you whether or not a vehicle is ready for emissions testing. A basic scan tool also can display all of the major system PIDs such as sensor values, voltages, loop status, switch status and other vital information that is often necessary to diagnose a problem.

Basic entry-level DIY scan tools typically sell in the $70 to $250 range. The two most popular brands are Actron and Innova, both of which offer various models of their products. Some of these tools also can read airbag and ABS codes, and some even offer basic graphing capabilities to display sensor waveforms.

Another type of basic scan tool is an Android or iPhone app that allows a smartphone or tablet to read codes and display system data. Such apps require a separate USB cable or a Wi-Fi or bluetooth dongle that plugs into the vehicle’s diagnostic connector.

Most of the current DIY scan tools only work on 1996 and newer vehicles with OBD2, and are not backward-compatible with older vehicles. However, there are a few tools that work on domestic OBD1 applications and come with the necessary cable adapters.

One of the limitations of most basic scan tools is that they usually lag current production vehicles by three to four years. It takes time to develop new software, so their ability to display the latest P1 codes and system PIDs on 2015 and newer vehicles may be limited.

Basic DIY entry-level scan tools also have a limited lifespan before they become obsolete. Many tools are updatable via a USB port, but the tool supplier may or may not offer future software updates. Technology is always evolving, so sooner or later the hardware in the tool may no longer be capable of keeping up with the latest changes in vehicle technology. That’s why a tool supplier may discontinue support for a particular tool after a few years, and introduce a new tool to replace it that has more up-to-date capabilities and features.

Here’s another point to ponder: An inexpensive entry-level OBD2 scan tool that claims to work on “all makes/all models” may not. Most tools provide good coverage for Chrysler, Ford and GM applications as well as many popular Asian makes (Honda, Hyundai, Kia, Nissan and Toyota), but some offer little or no coverage beyond basic P0 codes for European makes (Audi, BMW, Fiat, Mercedes and VW or less popular Asian makes (Mazda, Mitsubishi and Subaru).

DIY scan tools cannot give bidirectional commands for safety and liability reasons. Consequently, they cannot do things like energizing relays and solenoids, turn pumps and motors on and off, run system self-tests and initiate special learning procedures. They cannot flash-update PCMs or other onboard modules (which is a must-have capability for fixing many drivability and emission problems). Most basic tools also lack graphing capabilities for displaying sensor waveforms (although some do), and most provide little or no diagnostic guidance other than possibly listing some commonly replaced parts for certain types of faults. They also lack the ability to connect to the internet to access supplier or manufacturer service information.

Pro scan tools are a big step up for a DIYer because they are much more expensive, costing anywhere from $2,500 to as much as $16,000 or more depending on the product’s features. Pro tools can be updated, but there’s usually an added cost for regular updates.