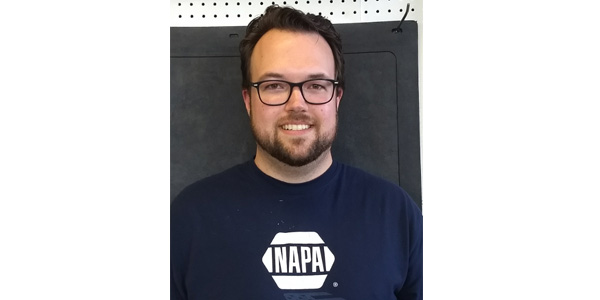 The correct answer for the September contest is the GMC Canyon.

The correct answer for the September contest is the GMC Canyon.

The winner for September is Branden Bettger, a parts specialist at NAPA Auto Parts in Port Angeles, Washington.

Now, let’s get to know the September “Guess the Car” champion.

BB: I’ve been working in the auto parts business for about two and a half years now. I recently received my ASE certification as a parts specialist.

CM: What were you doing before that?

BB: I was selling fruits and vegetables and health food in Ireland. And I was a student in Ireland for five years.

BB: What I like most about it is the people I work with. We have a great team of guys here and it makes coming to work fun and enjoyable. I also love the research aspect of it too. That’s a lot of fun. Everyday is like doing multiple puzzles.

BB: Probably one of the strangest – or one of the more difficult ones – actually came from someone who knew a lot about [cars], but it was something that was just very unusual and hard to find. Somebody asked me to find front and rear shocks for a 1975 Jensen-Healey. And we don’t have a listing in our system for anything regarding shocks on those. Even if you go online, there are only a couple kits available, and they’re modified Bilstein suspension systems. That’s all that was out there, and those were weeks out, and he needed them in a couple days.

So he brought in the old ones, and I was able to match them up by size and pressure, and found that the shocks that fit best were front shocks from a 1960s Corvette, and the rear shocks from a mid-90s Geo Tracker. That’s just very unusual. And he put them on and said they were excellent and the performance was way better than it had ever been, and he said he would highly recommend them to anybody else.

BB: The coolest car I’ve ever owned and also worked on was my first car actually, because I was a car nut from birth – Road and Track magazine was my bedtime story. My first car was a 1972 BMW 2002. It was a Roundie, with the sunroof, and it was British racing green. I loved that car and I did a bit of work to it.

CM: What kind of modifications did you make to it?

BB: I put on a Weber carburetor and an intake from a ti from a different model, and I put in Recaro seats from a 320is. And an aftermarket sound system as well. I was a teenager.

BB: I’m a guitarist, a recording artist and I perform live often.

CM: Do you play solo or in bands?

BB: I do solo stuff and I also play in a couple bands. A lot of times I fill in for solo musicians who need an electric guitarist.

Advertisement
In this article:GMC Canyon, Guess the Car, NAPA

Peterson Adds Black, Shaw To Sales Team
Connect with us