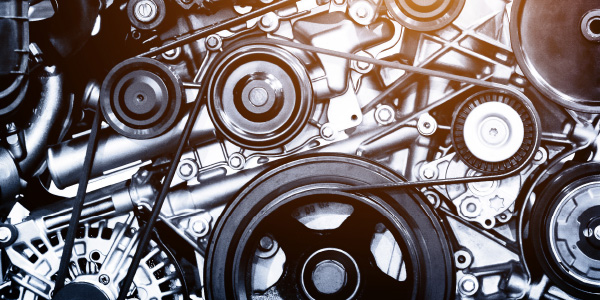 Belt misalignment can be caused by any of the accessory pulleys, or may be the result of improper belt installation.

Most of our belt requests occur after the customer notices the squealing or chirping noises commonly associated with improper belt tension and misalignment. Replacing the belt alone rarely solves the customer complaint, so replacement of the tensioner assembly and associated pulleys, along with recommending a thorough inspection of the other belt-driven components, is the best way to prevent comebacks and “defective” belt claims.

Worn or glazed serpentine belts may begin to squeal with age, but squealing from a fresh replacement belt usually indicates a larger problem, namely improper tension. The automatic belt tensioner is designed to provide constant tension for the life of the belt, but heat and repeated cycling of the tensioner’s internal spring can lead to fatigue and loss of tension. Loss of lubrication as well as foreign contaminants inside the tensioner housing may cause binding and limit the full travel of the tensioner arm. These can compromise the effectiveness of the tensioner, by providing too little (or too much) tension. Overtensioned belts rarely squeal, but can cause other issues. Squealing is primarily due to slippage, and is the most noticeable symptom of low belt tension. 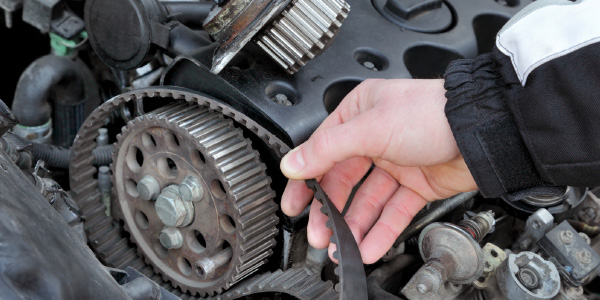 Belt misalignment can be caused by any of the accessory pulleys, or may be the result of improper belt installation. There are two types of misalignment, each caused by the relationship of the pulleys to one another. Angular misalignment occurs when pulleys become “tilted” because their shafts are not parallel. Worn bushings and bearings can allow rotating shafts to become cockeyed in their bores. Premature bearing and bushing wear is often caused by the strain of excessive belt tension. Installing a belt that is shorter than the original, or attempting to bypass a component like an A/C compressor, can alter the amount of tension, reducing belt life and accelerating wear on other components. Likewise, substituting larger pulleys can have the same effect, and also decrease the output of alternators and power steering pumps. Angular misalignment can also originate from the tensioner itself, as the internal pivot bushing wears and the tensioner arm begins to tilt. This also may cause binding between the housing and arm, which leads to tension issues.

Parallel misalignment occurs when a pulley is “out of plane” with the other pulleys in the drive system. While all of the pulleys may be running true, one or more of them could be sitting too far forward or back on its shaft. Improper installation depth of press-fit pulleys, like those found on power steering pumps, is a common source of parallel misalignment. The outer ring of a worn harmonic balancer may begin to “walk” from its hub, causing a similar misalignment. In either type of misalignment, the belt will track at an angle, leading to increased wear on the ribs as well as the belt’s edges. The added friction also increases the operating temperature of the belt, which can drastically decrease belt performance and service life. Misalignment angles of as little as three degrees can cause not only an annoying chirp, but also increase the chances of the belt jumping its pulley. Insufficient belt tension adds to the likelihood of belt loss.

Misalignment (and the resulting noise) is most pronounced on short spans between pulleys, but diagnosis of longer spans can be difficult. A few degrees of offset may not be obvious to the naked eye, so the use of a laser alignment tool or straightedge can be helpful in finding these little variations.