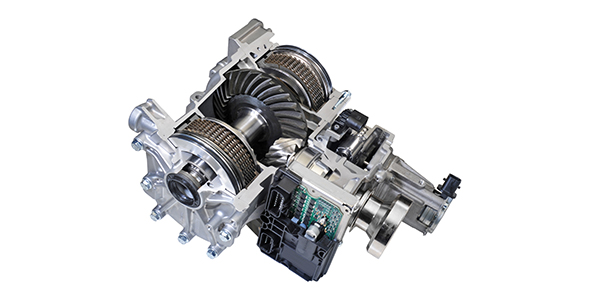 Manufacturers are reducing the complexity of transfer cases and differentials while relying more on the wheel ends.

No matter the manufacturer, there is almost always an all-wheel-drive (AWD) option for most platforms. Most of these systems are designed to be transparent to the driver.

Many AWD systems came onto the market in the 1990s. Unlike 4×4 truck systems of the day, these systems were always engaged and could not be disengaged by the driver. Many of the early systems used mechanical ways to manage the distribution of power to the four wheels. Most of these systems used viscous differentials and limited-slip differentials with special fluids inside. These components were prone to failure and are expensive to manufacture. Also, the performance of these systems could be challenging to control with sensors and actuators. Moreover, these AWD systems could cripple fuel efficiency.

Around 2004, many manufacturers of AWD systems started to abandon complex transfer-case center differentials in favor of less expensive clutches. Many vehicles were no longer equipped with limited-slip and Torsen differentials at the axles. Drivers never noticed the change or felt a loss in off-road or winter road capabilities. So what happened?

Many of these AWD systems were able to utilize the brakes and sensors in the wheel ends to better control the power of the AWD system. Also, transfer-case design was simplified and put the control in the hands of clutches and planetary gears. These changes helped reduce cost while making the system more reliable.

The core controls for most AWD systems are the ABS, traction control and stability control that uses the brake modulator to control traction. The brake hydraulic control module on these vehicles has at least 12 valves. With these control channels, an AWD with open differentials can perform like it has limited-slip or locking differentials. Passive or open differentials transfer the power to the wheel(s) that is spinning the fastest, or the wheel that is on the ring-gear side of the differential. These systems use the brake calipers to apply pressure to the spinning wheel and send power to the opposite side of the differential. This can evenly distribute the power to the rear or front axles under a variety of conditions.

The corrections are very fast pulsations of the brakes that are undetectable by the driver. If the car or truck is accelerating hard from a stop, the ETS will apply the brakes independently to prevent slipping. Even if the driver turns off the stability control, the brakes will manage the rear axle, so it performs like a limited-slip differential. If the vehicle is in snow or mud, it can control the traction with the brakes so the differential acts like it is locked.

Torque-vectoring differentials can work together with the stability control system and PCM to maximize traction during acceleration. It can be used during off-road and on-road situations at a wide range of speeds. The main inputs are the steering-position sensor and yaw sensor. The differential control module makes corrections by determining where the driver wants to go and where the vehicle is going to make a correction.

This rear differential can control the power to the rear wheels. These differentials can act like a locking, limited-slip or open differential with only a change of the electronically controlled clutches.

Torque-vectoring differentials have another advantage – they can disconnect a drive axle better than any locking hub. Decoupling an axle with clutch packs reduces rotating mass in the driveline and increases fuel mileage. The system then will decouple the center differential. On some vehicles, the driveshaft can be uncoupled from both the transmission and rear/front differential. This decoupling of the driveline can reduce rotating mass and load on the engine. This is all performed in milliseconds, and the driver does not feel even the slightest vibration.

Modern AWD systems need the foundation brake system and wheel-bearing hubs with accurate wheel-speed sensors to be in proper working order to function. This means that the pads and rotors must be able to produce enough friction to carry out the corrections. Issues with wheel bearings and seized calipers can result in less-than-optimal
corrections.

Any leaks from the transmission, transfer case or differential should be taken seriously. Damage can occur if the fluid drops to a critical level. The most common leaks can be found around the driveshaft and axle seals.

Sometimes, there will be oil leakage at the seam between the automatic transmission and the transfer case; it can occur around the entire seam. If droplets can be seen, the areas in the vicinity of the propeller shaft to the front-axle transmission must be sealed with black sealant. If the problem is a “sweating” leak, sealing must not be carried out, as this is a normal phenomenon inherent in the design of oil-filled systems. If there are any leaks in the differential transfer case, the vents and breathers should be checked. The seals can leak and fail if the case is over-pressurized.

This article originally appeared in Brake & Front End, a sister publication of Counterman.