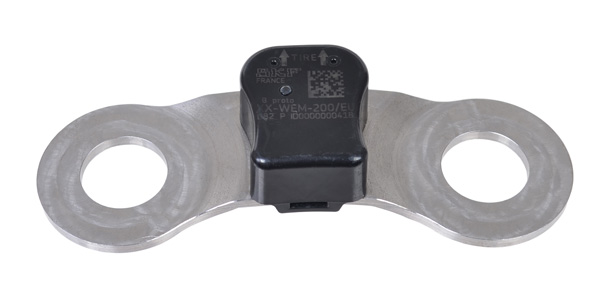 The sensor unit is installed on the wheels of heavy-duty or coach vehicles to intelligently monitor wheel-end vibration and temperature.

The SKF TraX wheel-end monitor (WEM) now can be integrated with a heavy-duty truck or motor-coach vehicle’s existing telematics solution or operated as a smart mobile-device application.

The SKF TraX WEM is a sensor unit installed on the wheels of heavy-duty or coach vehicles to intelligently monitor wheel-end vibration and temperature to detect any potential issues.

For heavy-duty vehicles, such as trucks and trailers, the SKF TraX WEM is integrated with existing Truck-Lite Road Ready telematics systems via its SmartBridge integrator (SBI).

The SKF TraX WEM notifies fleet maintenance and the driver in advance via wireless communication of any potential wheel-end condition that could compromise performance and safety. In the event of detected bearing vibration, notification is typically made thousands of miles before likely service interruption.

Commercial-vehicle customers who aren’t using telematic providers can download and subscribe to the SKF TraX app to check wheel-end status and receive alerts on their iOS-based mobile platforms.

“The SKF TraX WEM helps prevent unscheduled downtime by carefully monitoring each wheel end’s vibration and temperature,” said Cengiz Shevket, vice president of innovation and customer value for the Americas for SKF. “By detecting a potential problem in advance, fleets can avoid costly repairs, damaged reputations and traffic hazards. The SKF TraX WEM not only saves money, but also lives.”

“The combination of SKF’s industry-leading wheel-end monitoring capabilities with Saucon Technology’s ability to capture and disseminate critical vehicle health information, in near real-time, has created a solution that can protect your investment while reducing the costs of operating your bus,” said Richard Shelley, executive vice president, sales and marketing for Saucon Technologies. “This brings another dimension to Saucon’s goal of delivering a system that constantly monitors the overall health of your bus.”

Continental Introduces Floor Display For Commercial-Duty Wipers
Connect with us