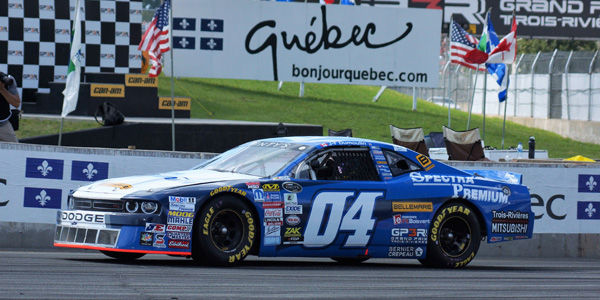 The exchange will take place in August at the Grand Prix de Trois-Rivières (GP3R), and in October at the NASCAR Whelen Euro Series season final at Zolder in Belgium.

For the first time in NASCAR history, two international series – the NASCAR Whelen Euro Series and the NASCAR Pinty’s Series in Canada – will exchange two drivers for one race in each other’s championship later this season.

The exchange will take place in August at the Grand Prix de Trois-Rivières (GP3R), and in October at the NASCAR Whelen Euro Series season final at Zolder in Belgium.

“This exciting idea creates an opportunity to showcase two major initiatives that were implemented in 2017: Spectra Premium’s commitment as a manufacturer and sponsor of motorsports, and its recent launch into the European market,” said Jason Best, senior vice president, aftermarket, Spectra Premium Industries. “Earlier this year, we reached new milestones in the development of a competitive high-performance radiator that helps in bringing teams to victory lane, and now we are turning to this driver exchange program to bolster our visibility in Europe,”

The European driver who will race at the GP3R will be determined by the NASCAR Whelen Euro Series regular-season standings following this coming weekend’s Oval World Challenge in Tours (France).

“Among the goals we set with for the NASCAR Whelen Euro Series, providing this kind of opportunity for our drivers is a very important one, so I am particularly happy to see our points leader cross the Atlantic to race at Trois-Rivières,” said Jerome Galpin, NASCAR Whelen Euro Series president and CEO. “It reinforces the great relationship between NASCAR Series at an international level and gives our drivers one more chance to shine. Adding this fantastic opportunity in Canada to the races in the U.S., we add important recognition to our championship and trophy winners. This development confirms that the NASCAR Whelen Euro Series is definitely one of the most attractive championships in Europe for every kind of driver.”

On Oct. 20, Canadian driver and Spectra Premium ambassador Jean-Francois Dumoulin will compete in the ELITE 1 Division in the NASCAR Whelen Euro Series final event for 2018 at Zolder, the second race of the driver exchange.

“We started discussing the possibilities of this exchange project five years ago, always looking for realistic ways to make it happen,” Dumoulin said. “I thought it was a great idea and really wanted to be part of it. As ambassador for Spectra Premium, building relationships that would help us move successfully into the European markets was always at the forefront of my thinking.

Spectra Premium, which has developed high-performance radiators for several stockcar series and recently launched its line of automotive parts for the European market, made the driver exchange possible.