MovinCool portable spot air conditioners are compact, self-contained units are made by DENSO Corp., one of the world’s largest manufacturers of automotive parts and a longtime supplier of WORLDPAC.

LONG BEACH, Calif. — Whenever outside temperatures went up, Paddock Imports, an independent Mercedes, BMW and Audi automotive service center in Denver, Colo., had a problem keeping their automotive technicians cool enough. As the heat and humidity increased, productivity plummeted. 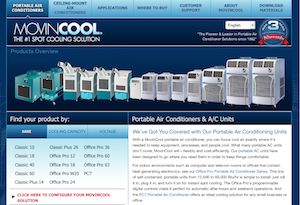 The company has two shops, one with 14 service bays and the other with two. The larger, main shop, which has 16,000 square feet of floor space and 27-foot-high ceilings, is located in a former warehouse in the rear of their facility. The smaller, front shop, which is used for race car fabrication, came equipped with two ceiling-mounted evaporative coolers.

“Most of the time we could get along in the front shop with the evaporative coolers, although sometimes it got pretty muggy and sticky — plus, we always had to leave a door open, which was a little counterproductive,” said Doug Paddock, the company’s owner. “But the back shop was the real problem area. Especially when we were working on cars with hot engines, it could get like a sweatbox in there, and downright miserable. The technicians were really suffering, and their efficiency would drop.”

Installing central air conditioning for such a large facility would have been cost prohibitive. As an alternative, Paddock tried opening the back shop’s bay doors and using drum fans to create a breeze. This produced little improvement, however. “The fans just moved the hot air,” said Paddock. “We also considered installing portable evaporative coolers, but with the large floor space and high ceilings, it just wouldn’t have been practical. Plus, of course, there would have been the added humidity to deal with.”

Paddock didn’t have a solution, but he was determined to find one. As luck would have it, just at that time, WORLDPAC, a distributor of original equipment automotive replacement parts, began to carry MovinCool portable spot air conditioners. The compact, self-contained units are made by DENSO Corp., one of the world’s largest manufacturers of automotive parts and a longtime supplier of WORLDPAC.

As part of WORLDPAC’s introduction of MovinCool, Mario Recchia, senior vice president of WORLDPAC, invited Paddock to see a demonstration at an upcoming trade show.

Initially, Paddock wasn’t impressed. “I have to be honest,” said Paddock. “When I first saw the MovinCool unit at the show I was skeptical. It didn’t look like it could do much. But within about 30 seconds after it was turned on, I was sold. I could feel the huge volume of cold air it delivered right to a specific area and realized this was exactly what we needed to keep our technicians cool without having to cool the entire shop.

“I was also impressed that MovinCool is made by DENSO. I was already familiar with DENSO’s quality from their auto parts, so I was confident the MovinCool systems would be reliable. I did a little online research to find out more about the process they were using, then ordered three Classic Plus 14 models.”

“When the MovinCool units were delivered to the shop, I didn’t say anything about them. At first the technicians didn’t know what to make of them. The units sat on the pallet for a day because we were busy. The next day, one of the technicians set a unit up for his area. It only took him about 15 minutes. He basically just rolled the unit into place and plugged it in to a regular 115-volt outlet. At the end of the day, another technician went over and saw how cool and comfortable it was in that area and set his up too, and then another followed.

“The difference is tremendous. The units reduce the temperature in our work areas by 20 degrees or more. In order for us to maintain the quality of service we offer our customers, we need to make sure our employees have a comfortable working environment, and MovinCool helps us do that. I can’t quantify the precise increase in productivity — although it is significant — but the improvement in morale alone is worth it.

“One of the advantages of the MovinCool units is their flexibility. They can be wheeled from one location to another and the cold-air ducts can be positioned to direct the air wherever it’s needed. Most of the time they cool the area where the technician is working, but they can also be aimed right at a hot engine to cool it down quicker. On the models we have, there are two cold-air ducts. One duct can cool one service bay while the other duct cools another bay.

“They need practically no maintenance. It’s easy to empty the condensation tank, which we do every two days or so.

“Another advantage, which we hadn’t expected, is the way MovinCool removes moisture from the air. Now the evaporative coolers we have in the front shop are more efficient, so that location stays more comfortable too. We don’t have the high humidity we had before, and we don’t have to leave an outside door open anymore.”

When one of the Paddock Imports technicians recently moved from the front shop to the back one, Paddock immediately bought another MovinCool unit for him. “It’s become a necessity for us,” he said. “Because of the type of cars we work on, we pride ourselves on having the latest technology and the right tool for the job. And now MovinCool is another one of those tools.”