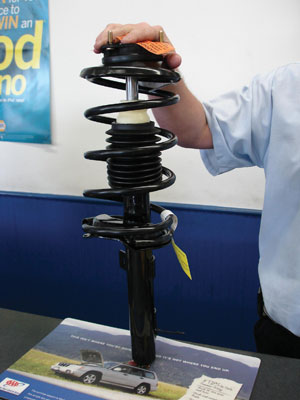 Quick and easy to install, complete strut assemblies have become a popular item with professional technicians.

One of the most popular products today are loaded strut assemblies. Initially introduced as a product for do-it-yourselfers, complete strut assemblies have become a popular item with professional technicians, too. Why? Because they are quick and easy to install. Time is money, and the faster a shop can turn around a strut replacement job, the more billable hours they can squeeze into their work day.

Loaded struts came about as a solution for do-it-yourselfers who wanted to replace the struts on their vehicles. The main obstacle that had to be overcome for the do-it-yourselfer was creating a ready-to-install strut that did not require a spring compressor.. Most DIYers could not justify the cost to buy a strut spring compressor for what would probably be a one-time repair job. The only other option left for the DIYer would be to rent a spring compressor from a rental store (if he could find the correct type of spring compressor for a strut along with the proper spring adapters), or take his old strut assembly to a repair shop or parts store to have it disassembled and rebuilt (a service that few provided).

In 2003, Monroe launched their new “Quick Strut” product line. It was a short line (only 23 SKUs) aimed at the fastest-moving applications for DIYers. The line quickly became popular with professional technicians, and has since grown to 150 SKUs, with more on the way. Monroe Quick Struts come with a limited lifetime warranty.

Other aftermarket suppliers including Federal-Mogul, Gabriel, KYB, Raybestos and others, also have seen the advantages of the ready-to-install strut, and are now offering loaded strut assemblies in their product lines.
We are also seeing a lot of low-cost loaded strut assemblies coming into the U.S. from offshore suppliers in China. Many of these strut assemblies are reverse-engineered knock-offs that are being sold on the Internet by distributors as private label or no-name products. One major domestic supplier of loaded struts says buyers should beware of these cheaply priced strut assemblies because they often have springs that are made of poor-quality steel and do not match the spring rate (stiffness) of the original equipment springs. This may have an adverse effect on ride height, which affects wheel
alignment, tire wear and handling. Poor-quality, uncoated steel springs are also at increased risk for breakage and spring failure.

Why struts?
MacPherson strut suspensions started appearing on cars back in the late 1970s as an alternative to the traditional short long arm (SLA) suspension. Struts were first used on import cars, followed by small domestic front-wheel drive cars like the Ford Escort, Dodge Omni and GM X-cars. When Dodge introduced the front-wheel drive minivan in 1984, it was also fitted with MacPherson struts up front. Today, you will find struts used on a wide variety of vehicles, including passenger cars, crossover SUVs and even some full-size SUVs and pickup trucks.

The strut was invented by Earl MacPherson (thus the name given to the component). Replacing the upper control arm, ball joint, shock absorber and coil spring with a strut assembly simplifies the front suspension. It’s the perfect packaging solution for front-wheel drive and unibody construction. That’s why struts are used so widely throughout the automotive industry.

A MacPherson strut is a structural component in the suspension. It also serves as the steering pivot for each front wheel, and it supports the weight of the vehicle via the spring that is wrapped around it. The shock dampening elements inside the strut housing provide the ride control function of an oversized shock
absorber.

Struts are also used in the rear suspensions of many vehicles for similar reasons. By combining the spring and shock absorber into one assembly, the rear suspension can be more compact to provide more trunk room. Struts may also allow more suspension travel without bottoming out.

Why a loaded strut?
Besides the time-saving and convenience factors of providing a ready-to-install strut assembly, a loaded strut renews ALL of the strut components, not just the strut housing with the shock absorbing components. With a single part number, your customer gets everything he needs. There are no extra parts to order and no unnecessary trips back to the parts store for parts that may have been forgotten or overlooked. Yes, it requires more inventory, and there is some duplication with struts, springs and other related parts that are already in your inventory. But if a customer wants a loaded strut, and you can’t provide it, you may lose the sale.

When to replace?
High-mileage struts may be
replaced for a variety of reasons. Poor ride control or fluid leakage are two common reasons, but strut replacement may also be required or recommended if a spring is sagging or broken, if a vehicle is handling poorly, if the strut is bent due to collision damage, or if a vehicle is experiencing a steering problem or suspension noise.

The upper bearing plate that serves as the upper steering pivot and connects the strut to the chassis is an often overlooked (and troublesome) component. If the old bearing plate is reused, there’s a chance that wear and corrosion can cause problems down the road — even if it appears to still be in good condition. After 50,000 or more miles of driving, the bearing plate is often worn and causing noise or steering problems. Symptoms of a bad upper strut bearing plate can include increased steering stiffness, poor steering return after turning a corner and suspension noise.
Most struts today are gas-charged to reduce aeration and fluid foaming for more consistent ride control. As the miles add up, the sliding friction between the piston rod and seal in the top of the shock or strut wears the seal. Eventually, the seal begins to leak, allowing the gas charge inside the strut to slowly escape. The seal may also leak fluid, and once fluid is lost, the strut can no longer provide any suspension dampening or control.

Worn struts and shocks can cause uneven, cupped tire wear, increase the wear on other steering and suspension components and cause noise, steering and handling problems. They can also increase the distance it takes to stop a vehicle on a rough road.

Another reason for replacing a strut and going with a complete strut assembly is that it includes a brand new spring. The spring could be replaced separately on the original strut, but chances are the shock absorbing elements in the strut are probably showing their age and should probably be replaced to restore like-new ride control and handling.

All springs sag with age. High-mileage springs typically weaken with age, and may no longer meet the original ride height requirements. Corrosion can also be a problem because it weakens a spring and increases the risk of breakage. The protective plastic coating that is applied to many late model springs can chip, crack and peel away, exposing the bare steel underneath to corrosion. Replacing the old spring with a brand new one eliminates the potential for trouble down the road.

Loaded struts also include new spring isolators and bumpers. On many struts, a thin rubber isolator is placed between the spring and the upper and/or lower spring seat to dampen suspension noise. A larger rubber jounce bumper may also be located around the upper strut rod to cushion the strut in case it bottoms out. Rubber parts harden with age, and often crack and fail. This can make a strut noisy if old parts are reused.

A complete strut assembly also saves the technician time because the old spring does not have to be disassembled and reassembled. Normally, this task takes about seven to 10 minutes depending on the strut and the type of compressor used. Obviously, a pneumatic compressor or one that can be tightened with an impact wrench is much faster to use than a manual compressor that requires tightening by a hand wrench or ratchet. A 10-minute time savings may not seem like much, but multiplied by two or four, it adds up. Anything that eliminates extra work and makes a technician’s job easier is going to be a hit.

There’s also less danger involved with installing a loaded strut. The spring in a MacPherson strut assembly exerts considerable pressure against the spring seat and upper bearing plate. This is why a spring compressor must be used to disassemble and reassemble struts. If used properly, spring compressors are perfectly safe. But if someone is hurrying and does not get the compressor positioned properly around the spring, there’s a potential it might slip and spring loose with considerable force, possibly injuring anyone who is standing nearby.

DIYers should always be warned to never remove the large nut on the top of a strut without first compressing the spring with a spring compressor. If they are not aware of this, they could be in for a nasty surprise!

Installation tips
Unless a strut is being replaced because of collision damage or a broken spring, you should recommend replacing both struts as a pair. This will maintain even ride height and ride control side-to-side.

No special tools, other than hand tools, are required to change a pair of loaded struts. However, on applications where there is no separate upper wishbone control arm to maintain wheel alignment, replacing a strut or pair of struts always requires checking and adjusting wheel alignment after the new struts have been installed. Removing the original strut destroys the original alignment adjustments, even if the position of the lower strut camber bolts are marked prior to disconnecting and removing the struts. If alignment is not checked and reset to specifications, a customer’s vehicle could have front wheels that are out of camber and/or caster alignment. Camber misalignment can cause a vehicle to pull to one side as well as increased shoulder wear on the affected tire. Caster misalignment can affect steering effort, steering return and high-speed stability.

Other parts your customer may require when replacing a set of struts include brake fluid (if brakes lines have to be opened or disconnected), and other steering and suspension parts such as tie rod ends, lower ball joints or control arm bushings