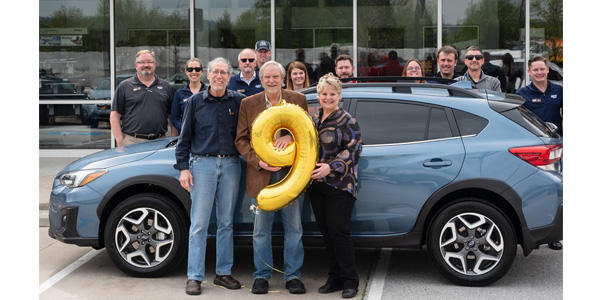 The automaker celebrated the milestone at Adventure Subaru in Fayetteville, Arkansas, where repeat Subaru customer Hershey Garner took delivery of a 2018 Crosstrek.

Subaru of America recently sold its nine millionth vehicle in the United States, according to the automaker.

The automaker celebrated the milestone at Adventure Subaru in Fayetteville, Ark., where repeat Subaru customer Hershey Garner took delivery of a 2018 Crosstrek.

A surprise celebration followed. Facility owner Don Nelms and his staff, along with Ali Daniel and Brian Wilson from Subaru of America, were on hand.

“I’ve been waiting for the right Subaru to come along, and found the perfect one on Adventure Subaru’s website: the 50th Anniversary Edition Crosstrek,” Garner said. “It has all the features I was looking for, and the color and size are the perfect fit.”

Garner, who also owns a 2005 Baja, has specialized as a radiation oncologist in Northwest Arkansas for more than 30 years. Garner, his wife, Denise, and their family are active in their local community.

Garner received several gifts as well as a charitable donation on his behalf to Feed Communities, which works with individuals, organizations, schools, universities, government agencies and foundations to create sustainable partnerships for increasing access to healthy foods and improving healthy food choices within the local community.

Subaru is the only manufacturer to achieve nine consecutive years of record sales and 10 years of consecutive growth in the United States, according to the automaker.

Subaru Has Sold 9 Million Vehicles In The United States

Hyundai Is On The Rise, But People Can't Spell It
Connect with us