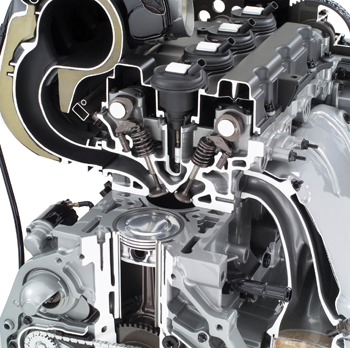 The five-cylinder was seen as a way to achieve better fuel economy and performance than the six, but with more power and torque than the four. 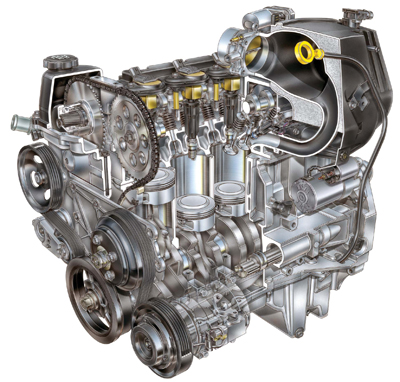 Back in 2002,General Motors developed what would become a new series of Vortec inline four-, five- and six-cylinder engines.

All of the engines in the “Atlas” engine lineup share a common architecture: an inline cylinder configuration, dual overhead cams, variable valve timing on the exhaust cam, an aluminum block and head, and a relatively high static compression ratio of 10:1.

Most of the internal engine parts are interchangeable (pistons, rods, valves, etc.) as are many of the externals (coils, injectors and sensors).

The only major differences are the number of cylinders in the block, and the use of dual balance shafts in the four- and five-cylinder engines (which are necessary to reduce harmonic vibrations). 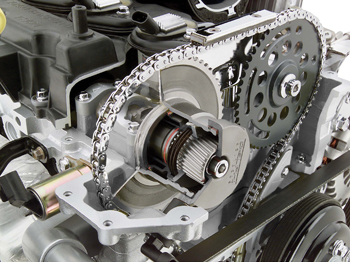 In 2005, the intake manifold on the 3500 was revised to improve emissions, and in 2007 the displacement of the four- and five-cylinder engines were both increased with larger bores to 2.9L (2900) and 3.7L (3700) respectively for the Chevy Colorado, GMC Canyon and Hummer H3.

Why Five Cylinders?
You may be wondering why GM just didn’t offer a four- and six-cylinder version of its engine. The five-cylinder was seen as a way to achieve better fuel economy and performance than the six, but with more power and torque than the four.

A five-cylinder engine has less internal friction than a six due to one less cylinder, but with proper tuning can produce nearly as much power as a six. 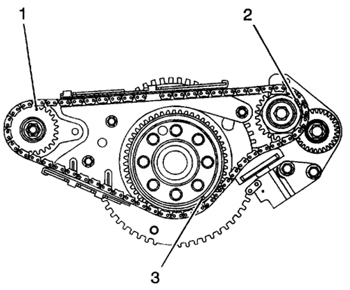 The balance shaft timing chain has three dark colored links for lining up the timing marks on the crank and balance shaft sprockets.

The five-cylinder block is also shorter in length, allowing it to be installed in a smaller engine compartment.

The only real drawback of the five-cylinder configuration is that there is some overlap in the firing cycles, creating harmonic vibrations that have to be dampened by the use of balance shafts.

The 3500 uses a pair of balance shafts that rotate at twice the speed of the crankshaft. The shafts are chain driven by sprockets located at the back of the engine.

If you’re tearing one of these engines down, and have to remove the balance shafts, it’s essential to get them correctly timed when the shafts are reinstalled.

The balance shaft timing chain has three dark colored links for lining up the timing marks on the crank and balance shaft sprockets. 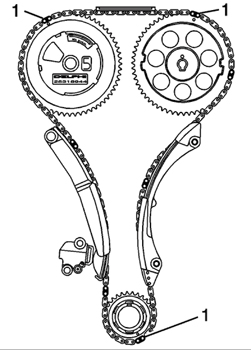 If the timing marks are not correctly timed, it may cause the engine to shake like an out-of-balance washing machine on the spin cycle at certain rpms.

Engine Service
The Vortec 3500 I5 (and its sister engines) have proven to be fairly reliable and trouble-free — with one exception. The factory valve seats in some 2004 to 2006 SUVs with the 2800 or 3500 engines apparently were not up to the normal hardness standards and may experience a premature wear problem.

Valve seat wear can cause a loss of compression that may result in hard starting, hesitation problems, loss of power, rough idle, surging and misfires. These problems may set diagnostic trouble codes (DTCs) such as P0171 or P0174 (lean codes), and/or P0300 random misfire.

GM issued a recall notice 07123A stating GM would extend the factory warranty to cover the cost of any valve seat repairs that may be necessary for up to seven years or 100,000 miles, whichever comes first.

So if you encounter a 2004 to 2006 Chevy Colorado or GMC Canyon with any of these codes or driveability issues, and a cylinder leakage test confirms the problem is leaky intake valves, the customer can take their vehicle to any GM dealer to have the cylinder head replaced at no cost.

Dirty fuel injectors can also cause similar driveability problems on these engines. 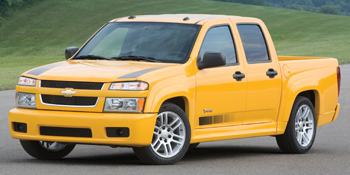 The Vortec 3500 I5 engines were offered in the Chevy Colorado.

The engines have Multec injectors, which can become gummed up with fuel varnish deposits over time if a customer is using cheap gas that does not contain adequate levels of detergent.

Top Tier additive requirements to prevent such problems from happening in the first place. 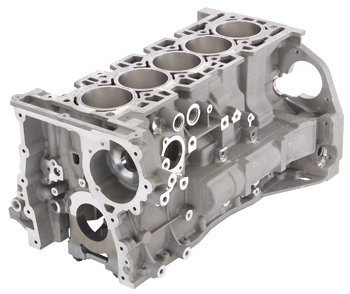 If a cylinder is worn or damaged, the individual liner can be replaced to repair the problem (which is much less expensive then replacing the entire block). GM TSB 04-06-01-022B covers the cylinder liner replacement procedure for these engines.

The bulletin says you should use their sleeve puller/ installation tool EN-45680-400 to remove and install sleeves.

Head Work
The dual overhead cams in the Atlas Vortec inline engine family are chain driven, so there’s no timing belt to replace.

However, if the cylinder head has to come off for any reason, or if the timing chain or tensioners are worn and need to be replaced, there are some special service ­requirements for the cams and timing chain. 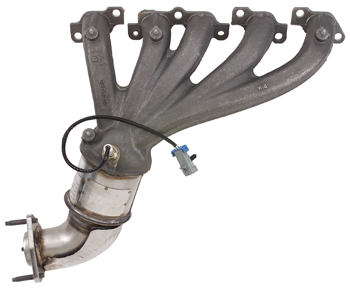 Basically, if you use special tool EN-48464 Low Timing Gear Tensioner Holding Tool, you don’t have to remove the front timing cover.

The tool holds the lower timing chain in place while the head is removed. Without this tool, you have to remove the timing cover to align the chain ­correctly.

All of these engines are interference engines with tight valve-to-piston clearances, so accurate cam timing is absolutely essential. The cam phaser on the front of the exhaust cam can retard exhaust valve timing from 0 to 25 degrees.

At idle, it is in the fully advanced position, and must be installed in this position to prevent the exhaust valves from hitting the ­pistons.

Changing the timing chain requires using a J44221 Cam Holding Tool (or equivalent) to keep the cams from moving when the chain is taken off.

The basic procedure is to remove the intake and exhaust cam position sensors, remove the front cover, rotate the crankshaft so number one piston is at TDC (top dead center), install the cam holding tool, then release tension on the timing chain by moving the tensioner shoe in. 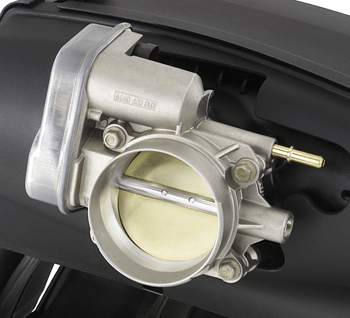 Idle problems caused by dirt or fuel varnish in the throttle body can be removed with throttle cleaner.

Use a tee to lock the tensioner in place, remove the cam phaser from the exhaust cam, then the sprocket from the intake cam, and finally the crank sprocket (all three sprockets should be replaced along with the timing chain).

Every seventh link on the timing chain is darkened to aid in aligning the timing marks. After installing a new sprocket on the crankshaft, align one of these marks on the chain with the mark on the sprocket (which should be at the 5 o’clock position).

Align another dark link on the chain with the timing mark on the intake cam sprocket (1 o’clock position). Then install the cam phaser on the exhaust cam. T

he word “Delphi” should be level and parallel to the seam on the head, and the cam phaser must be in the fully advanced position. Align another dark link on the chain with the mark on the exhaust sprocket (which should be at the 11 o’clock position).

Remove the tee from the chain tensioner and make sure all of the timing marks are correctly aligned. 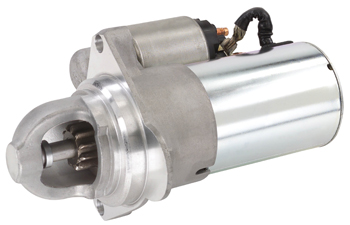 Starter icing issues eliminated — The Vortec 3500 is fitted with a new vented starter solenoid. The solenoid case has a micromesh-covered vent that protects the solenoid from debris particles but prevents moisture buildup. When the engine is warm, any moisture on the solenoid evaporates through the vent. The vented solenoid virtually eliminates the possibility of cold-start problems associated with solenoid icing.

Sensors
These engines use a single magnetic crank sensor mounted in the block near the back of the engine, and a pair of camshaft sensors mounted in the front of the cylinder head to monitor crankshaft position and cam phasing.

If the crank sensor, either cam sensor or the PCM (Powertrain Control Module) on one of these applications has to be replaced for any reason, you must perform a CKP System Variation Learn Procedure using a Tech 1 or similar scan tool.

It’s the same procedure that’s required on many other GM engines so the PCM can learn the relative positions of the crank and cam sensors. If the procedure is not performed, the engine may not run properly or may not start.

The 2004 version of the 3500 came with two knock sensors. Knock protection was deemed critical on these engines because of their high compression ratio (10:1) and use of regular 87 octane fuel.

But improved PCM programming allowed GM to discontinue the second knock sensor in 2005. The remaining knock sensor is located on the left side of the engine between cylinders number 3 and 4.

Inputs for fuel management are provided by a mass airflow (MAF) sensor mounted ahead of the electronic throttle body, a manifold absolute pressure (MAP) sensor on the intake manifold and a throttle position (TPS) sensor on the throttle.

GM uses its Oil Life Monitor System on these applications to indicate when it’s time to change the oil.

Based on vehicle usage, temperature, run time, vehicle speed, load and so on, the estimated oil change interval may vary from as little as 3,000 miles to as much as 15,000 miles.

We think pushing the oil change interval much beyond 7,500 miles with any oil other than a top quality full synthetic is asking for trouble.

The Chevy Colorado and GMC Canyon both have conventional fuel filters located outside the fuel tank that can be replaced on an “as needed” basis. GM offers no recommended service interval for the filter.

The serpentine belt likewise has no recommended replacement interval. Most belts are good for 100,000 miles, but need to be inspected to check for wear and proper tension. Belt noise and/or accelerated wear can be caused by pulley misalignment. GM TSB 08-06-01-006A says to use a laser pulley alignment checker if you suspect belt noise or wear may be due to misalignment of the power steering pump pulley.

Inspect the engine air filter every 15,000 miles and replace as needed. The Chevy Colorado and GMC Canyon are not equipped with a cabin air filter.

The Dex-Cool coolant is a five-year/150,000-mile coolant. Most trucks will reach five years before the odometer hits 150,000 miles, so recommend changing the coolant after five years of service. Waiting longer increases the risk of damaging coolant corrosion and expensive cooling system repairs.