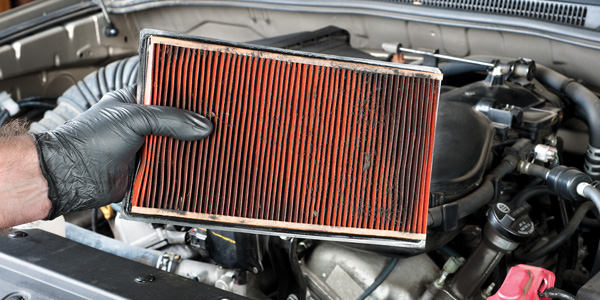 A high-quality air filter does a world of good for your engine. But even the best filters are not 100-percent efficient.

Did you know that as little as 8 ounces of dirt can ruin an engine? Most motorists don’t worry about road dust when driving because they assume their air cleaner will trap the dust and protect their engine from such harm. A good high-quality filter will do just that. But even the best filters are not 100-percent efficient.

A high-quality premium air filter will usually stop 99 to as much as 99.9 percent of particles between 5.5 and 176 microns in size. The smallest particles are less than one-tenth the diameter of a human hair, so we are talking really fine dust. Yet, it’s often the smaller particles (5 to 20 microns) that damage engine bearings and piston rings. Dirt can also foul Mass Airflow (MAF) sensors, causing driveability, performance and emission problems.

Larger particles are easier to trap because of their size, so few big particles get through the filter. But smaller particles can slip between the fibers of the filter media and enter the engine. The size, density and orientation of the filters determine how well the filter is able to catch these particles.

There is a special lab test procedure called ISO 5011 that filter manufacturers can use to measure filter efficiency. This test replaces the former SAE J726 test and offers better accuracy for determining how much junk a filter actually stops. It also breaks down the results by showing the percentage of particles trapped by micron size.

While these numbers don’t seem that far apart, it makes a huge difference in the volume of dirt (especially smaller particles) that can get through the filter and enter the engine. A filter that is only 93 percent efficient will pass more than 20 times as much dirt as one that’s 99.5 percent efficient! That’s a LOT of dirt that can cause wear as the miles add up.

An engine pulls in more than 10,000 gallons of air for every gallon of fuel that’s burned. And the dustier the environment (urban or rural), the more dirt the filter has to trap – and the more dirt that will get through and damage the engine if the filter is not doing its job.

The dirt that’s trapped in a filter over time will actually increase the efficiency of the filter by blocking the pathways where other particles can get through. But this also restricts airflow and gradually reduces the engine’s breathing efficiency and performance. So filters have to be replaced regularly based on miles driven and the filter’s condition.

The vehicle manufacturer recommended service intervals for some air filters may be as high as 50,000 to 60,000 miles or more, while others recommend inspection and replacement every 25,000 to 30,000 miles.

The manufacturer recommended replacement intervals are a guide only. Filter life can vary quite a bit depending on how much dirt the filter has actually been exposed to since it was first installed. A filter that has seen less dirt will obviously last much longer than one that has been smothered by driving in a dirty environment. In some rural areas, an air filter may need to be replaced every 12 months or less.

Another issue with air filters is how well they fit (or misfit) their housing. Most passenger cars and light trucks have a flat panel filter that fits inside a two-piece plastic housing. Around the edge of the filter is a molded synthetic rubber or silicon gasket that seals the filter against the housing. If the filter gasket is a poor fit and leaves air gaps anywhere around its edge, it will create an open path for unfiltered air and dirt to enter the engine. The same thing can happen if the plastic air cleaner housing is warped or does not close properly.

Technical Forum 2017: Air Filters – Efficiency Is A Factor To Consider