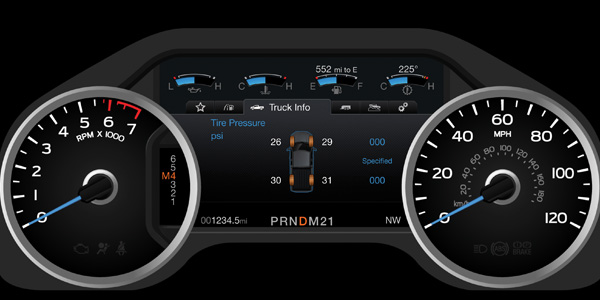 TPMS takes the guesswork out of checking tire pressure because the system checks the tires every time the vehicle is driven. And some systems even keep an eye on pressure when the vehicle is parked.

Tire pressure monitoring systems (TPMS) monitor the inflation pressure of the vehicle’s tires and alert the driver if a tire is under-inflated or is losing air. Low tires are dangerous because a certain amount of air is needed to support the tire. Low tires run hot and are prone to failure – especially when a vehicle is heavily loaded and is traveling at high speed during hot weather.

Studies have shown that more than half the vehicles on the road have improperly inflated tires (usually under-inflated, but sometimes over-inflated, too.).

TPMS takes the guess-work out of checking tire pressure because the system checks the tires every time the vehicle is driven. And some systems even keep an eye on pressure when the vehicle is parked. TPMS has been standard equipment on all cars and light trucks since model year 2008, and on may vehicles previous to that.

On most direct TPMS systems, each sensor has its own designated location: RF (Right Front), LF (Left Front), RR (Right Rear) and LR (Left Rear). Replacing the sensors requires performing a “relearn” procedure so the TPMS control module can relearn the position of each sensor. This may require using a special TPMS tool to energize and/or program each sensor.

TPMS sensors have a pressure transducer and a radio transponder that sends a coded signal to the TPMS module or other module. The coded signal is broadcast at 315 or 433.92 MHz (depending on the application), and includes the sensor’s location and pressure reading. On most systems, the signal is sent every 30 to 60 seconds when the vehicle is traveling faster than 12 to 15 mph.

The sensors are very accurate, usually to within plus or minus 1.5 PSI. They have a non-replaceable internal lithium-ion battery with a service life of 5 to 10 years. The more a vehicle is driven, the faster the battery is used up. When the battery dies, the sensor stops broadcasting a signal and the control module flashes the TPMS warning light indicating a fault has occurred in the system.

Extreme care must be used when dismounting or mounting tires on the rims so as not to damage the sensors. When tires are dismounted or mounted on a wheel, stem-mounted sensors should have new grommets or o-rings installed to reduce the risk of air leaks later on. The stem nut, valve core and cap should be replaced, then carefully tightened with an inch-pound torque wrench or driver so it will seal properly.

Most TPMS sensors require a special nickel-plated valve core, which also must be installed and tightened with care. Ordinary brass cores can corrode in the metal valve stem, resulting in air leaks or breakage when an attempt is made to remove the core later.