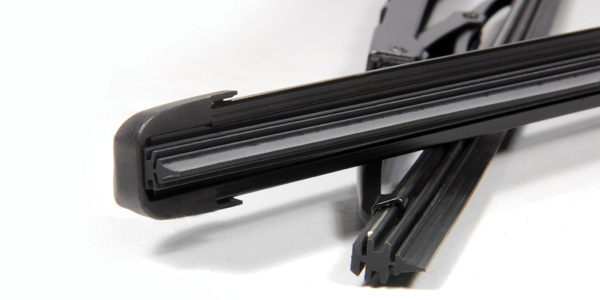 There’s a lot of misinformation on Internet automotive forums about wiper blades.

There’s a lot of misinformation on Internet automotive forums about wiper blades. One topic that always pops up when doing a search on wiper blades is how to quiet noisy wipers. Squeaking and chattering wipers can be really annoying, and they usually do a poor job of wiping. As natural and synthetic rubber blades age, the rubber becomes hard and stiff. This can lead to noise, cracking and tearing – and poor wiping performance. A stiff blade can’t produce the smooth squeegee effect that’s necessary for a clean wipe because the blade isn’t flexible enough to conform to the glass.

The fix for noisy wiper blades, of course, is to replace the old blades with new ones. Yet there’s all kinds of bogus advice on how to quiet noisy wiper blades by wiping them with petroleum jelly, spraying them with WD-40, wiping them with windshield washer fluid, even applying wax to the glass! Although these tricks may reduce friction and noise, they won’t really restore an old set of stiff wiper blades. In fact, many chemicals will attack natural and synthetic rubbers, making the situation even worse. So advise your customers to replace their wiper blades if they are noisy, streaking or chattering.

Installation issues are another question that often appears in automotive forums. Many late-model cars and light trucks use the popular J-hook wiper arm mount. It’s a simple slip off, slip on attachment provided you can figure out how to release the old blade so it can be removed. On some blades, it’s not obvious, which leads to frustration and sometimes broken wiper arms. On most J-hook style blades, there is a release tab under the arm that unlocks the blade. Some blades, however, have a snap down trim cover that prevents access to the release tab underneath. The cover is typically removed by pinching both sides while pulling to lift the cover up and out of the way.

On vehicles that don’t use a J-hook mount, universal adapters are usually included with the replacement blades so they can be installed on almost any application regardless of the style of mount. Some mounting adapters are easier to figure out than others, so a customer may need help figuring out how to use the adapter. The best advice here is to familiarize yourself with the adapters so you can show a customer how the adapter snaps into place and how to change the blade. Or, if your store allows it, offer to install the blades for your customer.

Changing a set of wiper blades is usually not that hard, but it does carry some risk if done incorrectly. One of the most common mistakes is letting the spring-loaded wiper arm snap back against the windshield after the blade has been removed. That’s a good way to crack a windshield. The arm should be fully extended and locked in the outward position when the blade is removed, and a shop rag or small towel rolled up, or a thick car wash sponge should be placed on the windshield to cushion the arm should it accidentally snap back against the glass.

There’s such a wide assortment of blade styles and price ranges these days that some consumers may have a hard time figuring out which blade to buy. Those on a budget will usually go for the cheapest blades because they figure a $6 blade will wipe just as well as a $24 blade. Well maybe, but the least expensive blade won’t have the durability of a premium blade that’s made from much better materials, and it probably won’t have the design and aerodynamic advantages of a premium blade.

Wind lift can really reduce the effectiveness of wipers on a sloped windshield at highway speeds. The best-performing blades will be those that are low-profile, like a flat beam style blade. Such blades usually have an airfoil that runs the length of the blade to help hold it against the glass at highway speeds. Beam style blades and those that have a covered frame will also be more resistant to ice and snow clogging during winder driving.