The basic technology used in 12-volt lead-acid car batteries has remained pretty much unchanged for decades.

Read up on essential products in our annual technical sales seminar section. We review 12 products you need to know better to move products.

The basic technology used in 12-volt lead-acid car batteries has remained pretty much unchanged for decades. The biggest innovations have been changing the plate alloys to reduce gassing (maintenance-free batteries), putting a battery within a battery for emergency starts if the main battery runs down, and eliminating spills by using spongy fiberglass mats between the cell plates to hold the acid (Absorbed Glass Mat or AGM batteries). 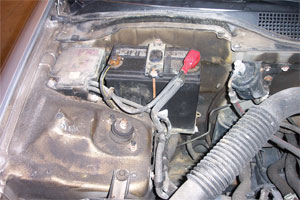 The 12v battery’s basic purpose also has not changed. It provides cranking amps for starting the engine, and serves as a reserve power source for times when the vehicle’s electrical demands exceed the output of the alternator.

However, some things have changed. One is the electrical drains that are being placed on the battery when the engine is not running. Late-model cars are rolling computers crammed with electronic modules that all siphon power from the battery and charging system. As long as the engine is running and the charging system is producing enough current to meet all of these loads, the battery gets along fine — assuming the vehicle is driven long enough and fast enough to keep the battery fully charged. Twenty minutes of continuous driving every few days is usually enough to maintain most batteries.

When the engine is shut off, many of these modules continue to drain power from the battery. Most will eventually go into “sleep mode” and shut themselves down, but some remain awake 24/7. The drain can add up to 50 to 100 milliamps in some cases, which can run down a battery over time if the vehicle isn’t driven.

If the battery is not maintained at or near full charge, the plates can become sulfated and lose their ability to accept and hold a charge. This can lead to reduced battery power and shorten the life of the battery.

The average service life of a lead-acid battery is only about four years (three years in extremely hot climates), while that of AGM batteries is typically a couple years longer (thus their higher price). Premature battery failure can occur as a result of extreme vibration, overcharging, chronic undercharging or allowing the battery to fully discharge and not recharging it soon after. Batteries can freeze if they are discharged and the temperature is below 32 degrees F.

A battery’s state of charge can be determined with a voltmeter. A fully charged battery should read about 12.68 volts. A reading of 12.45 volts indicates the battery is 75 percent charged. Anything less means the battery is low and needs to be recharged.

If a battery is low, the output of the charging system should be tested with the engine running, and should be around 1.5 to 2 volts higher than battery voltage. Also, the battery cables and terminals should be checked for tightness and corrosion, and cleaned if necessary, to restore a good electrical connection.

A low battery is not necessarily a bad battery. A battery’s condition can be checked quickly and easily with a conductance tester, or with a load tester (which takes longer and requires a fully charged battery for accurate test results). A battery that tests “bad” needs to be replaced.

Most batteries are “dry charged” at the factory before they are shipped. Even so, the battery should be placed on a charger before it is installed to make sure it is fully charged and ready to go. Also, sell the oldest batteries first to keep your stock fresh (refer to the date code on the battery).