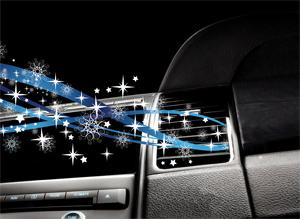 Competition between U.S., Europe Heating Up Over Next Cabin Cooling System Refrigerant

When most people think of the U.S. in competition with Europe, it’s usually the Ryder Cup that comes to mind. The Ryder Cup is a golf trophy presented biennially to the winning players following the “Ryder Cup Matches” — a competition between teams from Europe and the United States. The match is held every two years and is played on courses alternating between the United States and Europe.

While the next Ryder Cup match won’t be until 2010 in Newport, Wales, another competition appears to be “heating up” between automakers from the U.S. and Europe.

This one concerns which type of cabin cooling system will be used in new vehicles coming off the lines in 2011, replacing the current HFC-134a-based systems.

The reason? While HFC-134a is a “greener” hydrofluorocarbon refrigerant that replaced the ozone-depleting CFC-12 — which was phased out under the Montreal Protocol more than a decade ago — it still has a high global warming potential (GWP) of 1,430.

The Move to Phase Out R-134a
The Europeans have decided R-134a is bad for the environment. So automakers there are working to develop a standard A/C system that will adhere to new European Union (EU) rules that will require all European vehicles equipped with A/C systems to use a refrigerant with a GWP rating of 150 or less. So far, the European automakers are moving forward with these plans to start phasing out R-134a in new vehicles by January 2011, and they will have until 2017 to completely eliminate R-134a systems from production.

In the U.S., California and about a dozen other states have also begun the challenge to demand lower refrigerant and tailpipe greenhouse gas emissions.

Mobile A/C manufacturers and suppliers have come up with a handful of alternative refrigerants for A/C systems that are available with GWP ratings of 150 or less. These include: R-744 (carbon dioxide, which has a GWP of 1), HFC-152a (a refrigerant with an acceptable GWP of 150, however, deemed flammable in various tests) and a few blended refrigerants with GWP ratings under 150.

About two years ago, refrigerant suppliers introduced HFC-1234yf, which is considered to have the highest potential for replacing R-134a. This new refrigerant has a GWP rating of 4.

Since the lead times required for new car designs can take years, global automotive manufacturers and suppliers have been working with industry experts and independent test laboratories since 2007, when the first SAE International Cooperative Research Program (CRP) was formed to investigate the safety and performance of HFO-1234yf for use in mobile air conditioning.

MACS 2009
During the Mobile Air Conditioning Society (MACS) annual convention and trade show held in early February at the Hilton Anatole in Dallas, the issue of commercialization of HFC-1234yf-based systems was addressed during a half-day technical session.

The educational session for journalists, technicians and A/C system suppliers was hosted by Dr. Stephen Andersen and Kristen Taddonio of the U.S. Environmental Protection Agency and Dr. Alberto Ayala of the California Air Resources Board. Featured speakers included Mary Koban of DuPont and Dr. David Wilson from Honeywell, representing the developers of this new refrigerant. The panel recapped some of the findings from the SAE meetings in 2007, as well as recent testing outcomes.

The refrigerant developers explained that HFC-1234yf has a very low GWP rating and claimed that air conditioning systems that use this formula are safe.

Koban said that DuPont was pleased that SAE International and leading automotive manufacturers have recognized the benefits of HFO-1234yf and that it has a dramatically lower global warming potential than the R-134a refrigerant used today. She also said that HFO-1234yf-based systems would be similar to R-134a systems, requiring little design changes for automakers. And, technicians familiar with R-134a systems would have little trouble servicing HFO-1234yf systems.

While the developers conceded that the new refrigerant and these A/C systems would have a slightly greater cost than current systems, there would be fuel cost savings to the driving public over the life of the vehicle. DuPont and Honeywell researchers have said the new systems use less energy to operate, thereby providing improved vehicle engine efficiency that would allow 12 billion gallons of gasoline to be saved worldwide by 2025.

In December, SAE’s International CRP technical sessions, sponsored by major automotive manufacturers including Chrysler, Ford, General Motors, Fiat, Jaguar, Land Rover, Hyundai, PSA, Renault and Toyota, released a report summarizing results of its industry evaluation of the low GWP refrigerant, hydrofluoro olefin (HFO)-1234yf.
The report validated that HFO-1234yf is safe to use in mobile air conditioning, and that, of all the proposed alternatives considered, HFO-1234yf has significant environmental benefits. The report concluded HFO-1234yf offers “the greatest potential to meet environmental and consumer needs.”

However, two years ago, German automakers announced that they were moving ahead instead with R-744-based systems, and at this time appear to holding steady to that position. Mercedes, BMW and Volkswagen/Porsche reported that they have decided against using HFO-1234yf in their vehicles, claiming that they felt there were safety risks with its use. While the German automakers would not elaborate on their concerns with HFO-1234yf, they did report that they completed their testing on the refrigerant’s capabilities last year.
The remaining automakers have a different point of view.

“All but four participants agree that HFC-1234yf is the refrigerant-of-choice to replace HFC-134a in motor vehicle air conditioning,” the U.S. EPA’s Anderson said. “The best estimate is that companies making 70 percent of air conditioned vehicles sold worldwide already consider R-1234yf to be the environmentally superior choice.”

What’s Next?
For now, no one seems to know if HFC-1234yf will be the refrigerant of choice used in U.S.-made vehicles anytime soon.

But A/C service equipment manufacturers we spoke to at the MACS show said once a formal decision is made from automakers, refrigerant identifiers and refrigerant reclaiming/recycling units capable of servicing HFC-1234yf would be made available to technicians within months.

And, the EPA was adamant in stating that current R-134a systems would not be retrofitted to handle HFC-1234yf refrigerant.

Since their announcement in 2006, the German automakers have stayed pretty mum on their R-744-based system research. However, various OE suppliers have demonstrated CO2 A/C systems in both Europe and the U.S.
Their designs are different from R-134a systems in that they operate at higher pressures and need to include a heat pump to operate a fully functioning HVAC system in the vehicle.

However, R-744 system developers claim that CO2 air conditioners consume 25 percent less fuel than conventional R-134a systems, and enable a reduction of CO2 tailpipe emissions of up to 7g/km while operating the A/C system.

While there aren’t many answers when it comes to the future of cool, it has been raising some questions.
For example, what will aftermarket repair shops in the U.S. do when it comes time to service a customer’s German-made vehicle’s A/C system based on CO2 technology?

Will independent repair shops have the training and equipment needed to service these high-pressurized R-744 systems, or will vehicle owners be forced to take their vehicles back to the dealership?

The Future of Cool