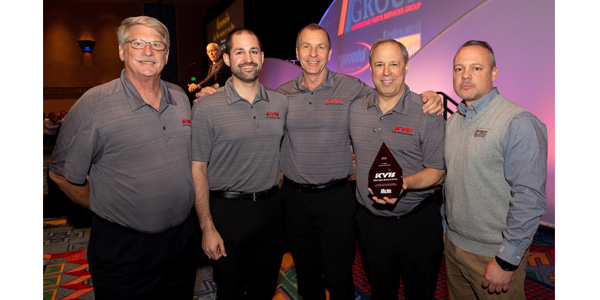 “At The Group, the Co-Man operation is a big difference-maker in the marketplace and it is important to our membership that the vendors who participate in Co-Man fully support it,” said Larry Pavey, CEO of The Group. “The KYB team consistently does an outstanding job supporting the Co-Man program and members of The Group agreed by selecting them for this prestigious honor.”

Presented annually, The Group Co-Man vendor awards honor supplier partners that have shown outstanding dedication and support of The Group Co-Man operation and programs. The Co-Man enterprise began with members deciding to open a jointly owned warehouse. The operation has seen significant growth each year since its inception, expanding numerous times to meet the rapidly growing demand of members.

“High order-fill rates are valued by members of The Group. Autolite delivered consistently high order-fill rates, allowing them to meet the needs of their customers,” Pavey said. “We congratulate them on this award and thank all supplier partners who participate in Co-Man for their continued support of this very important program.”

Advertisement
In this article:Autolite, KYB

The Group Approves US Motor Works