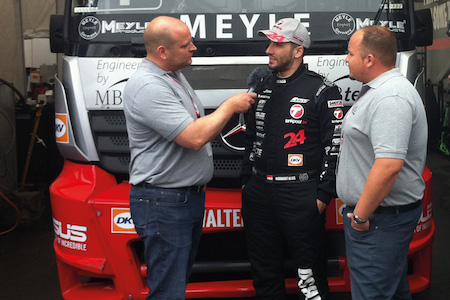 Excited by their experience of the Truck-Grand-Prix’s thrills and chills, the “MEYLE Mechanics” are dedicating their latest video to this event offering motorsport enthusiasts exclusive interviews and a fascinating glance behind the scenes of truck racing. 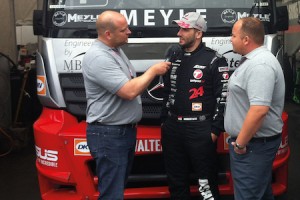 HAMBURG, Germany — MEYLE’s commitment to truck racing is a rewarding investment: At the Nürburgring Truck-Grand-Prix racing weekend held in early July, the company-sponsored “tankpool24” team claimed a total of four podium positions. Excited by their experience of the Truck-Grand-Prix’s thrills and chills, the “MEYLE Mechanics” are dedicating their latest video to this event offering motorsport enthusiasts exclusive interviews and a fascinating glance behind the scenes of truck racing. MEYLE has been supporting the “tankpool24” team with MEYLE brake discs and pads since 2014. As of this year the company also supplies MEYLE engine mounts.

Trucks thundering down the track, the atmosphere crackling with adrenalin and four top positions to celebrate for the “tankpool24” team – these are the highlights of the Truck-Grand-Prix staged at the Nürburgring from July 1-3. Right in the thick of it this time – the “MEYLE Mechanics,” enjoying the races and having a chat with two-time reigning European Champion and “tankpool24” driver Norbert Kiss, his colleague André Kursim and crew chief Markus Bauer. André Kursim talks about his experience with the MEYLE brake discs and the dramatic load levels that brake parts must be able to withstand during a truck race. Stefan Honens, technical expert of the “tankpool24” team, explains the quality criteria any component must meet to be suitable for use on the team’s race trucks.

And everybody who is considering challenging the “tankpool24” team to a bet might be interested to hear about the experience of crew chief Markus Bauer. Without giving too much away: the team’s passion for their mission is impressive.

As a sponsor and development partner of the team, Hamburg-based manufacturer MEYLE was particularly happy with the team’s performance at the Nürburgring: to the cheers of 123,000 thrilled spectators, “tankpool24” won four podium positions at the fourth race of the FIA European Racing Championship series. Sven Nielsen, head of strategic product development at MEYLE, is delighted at the team’s success: “Claiming four podium spots has exceeded our boldest expectations. It testifies once again to the superior quality of MEYLE brake discs, brake pads and engine mounts.”

The latest “MEYLE Mechanics” video with live impressions from the Truck Grand Prix race at the Nürburgring is available here.