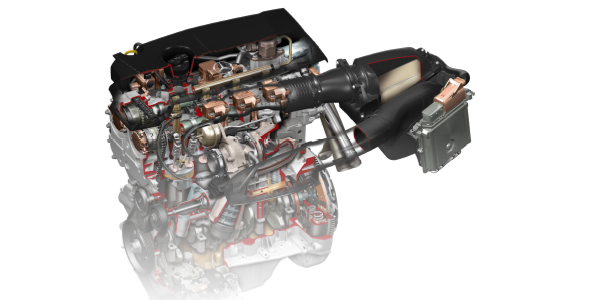 Sensors are expected to grow in use due to new concepts in emissions reduction.

Most late-model vehicles have an average of 60 to 100 sensors on board. However, due to rapidly advancing technology, the number of sensors is projected to reach up to 200 per car in the next few years.

The internal combustion engine (ICE) is increasingly controlled by “smart sensors” that feed data to multiple on-board computers. According to IHS Markit, sales of automotive sensors have gone through the roof in the past few years and are expected to top 1.3 billion units by the end of the year, up from nearly 1.1 billion in 2013. Sensors are expected to grow in use due to new concepts in emissions reduction, which require advanced sensors to control the operation of exhaust after-treatment systems.

Oxygen sensors are vital to an ICE engine because of their role in controlling the fuel-injection system and emissions. An O2 sensor works in tandem with the ECU and other components to allow the injector to pulse the right amount of fuel into the cylinder during combustion. The primary function is to maintain efficient combustion and not be too lean or too rich. If the sensor detects unburned fuel, it will relay a voltage signal to the ECU, telling it to reduce the amount of pulse width to the injectors (fuel), depending on the demand of the driver’s right foot and other conditions.

Mass airflow (MAF) sensors measure the volume and density of air entering the engine at any given time. The ECU uses this information, along with input from other sensors, to calculate the correct amount of fuel to deliver to the engine. Data from this sensor helps calculate ignition-timing and transmission-shifting strategies.

Similar in function to the MAF sensor, the manifold absolute pressure (MAP) sensor measures manifold pressure and relays the information to the ECU. The information is used to calculate air density and determine the engine’s air-mass flow rate.

Tire-pressure monitoring systems (TPMS) monitor the air pressure inside each tire. If the air pressure suddenly drops or goes below a certain threshold (typically around 22 to 24 psi), the TPMS triggers a warning light to alert the driver. Newer systems also display the actual pressure readings for each tire and indicate which tire is low.

TPMS systems are touted as life-savers. However, they also can produce false warnings during cold weather when temperatures drop. The air pressure inside a tire can drop 1 psi for every 10 degrees F. If a tire is a little low during warm weather, it may trigger a warning light if temperatures suddenly drop.

Crank-position sensors (CKP) are one of the primary electronic devices used to monitor the position and speed of the crankshaft for purposes of feeding the information to the PCM to control the fuel injection and ignition timing and other engine parameters.

A throttle-position sensor (TPS) is located on the butterfly spindle/shaft so it can directly monitor the position of the throttle. Some sensors also are used as an extra closed throttle-position sensor (CTPS) to indicate that the throttle is completely closed. These sensors also can be part of electronic throttle control (ETC) or “drive-by-wire” systems.

Vehicle-speed sensors (VSS) help regulate power-steering pressures at slow speeds, making parking easier. The antilock brake system (ABS) works with the VSS information to determine when a wheel is locked and releases pressure to that wheel to maintain stability. Some vehicles use separate sensors for the ABS. However, most systems use information from the wheel sensors to act as a VSS.

The Rise Of Automotive Sensors