This is the first launch of this advanced seat belt technology in North America, combining active and passive approaches to offer enhanced safety, comfort and convenience to vehicle occupants, the company says. 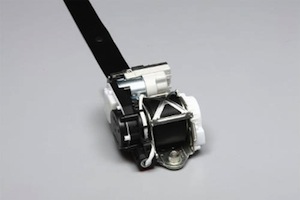 "ACR2 is designed to use braking and stability control sensor information to recognize critical situations before a potential accident," said Uwe Class, senior manager of mechatronic systems for TRW’s Occupant Safety Systems. "It reacts by helping to secure the driver and passenger by removing seat belt slack — so the occupant position is improved in advance of an impending crash."

"The system also offers additional convenience features such as slack removal after the belt is buckled."
Additionally, the ACR2 provides dynamic driving support which has been developed to help keep the driver in a more stable position in the seat during highly dynamic situations and during rapid deceleration. This features an advanced version of TRW’s proprietary situation management algorithm.

"The ACR2 situation management algorithm continuously processes signals from the vehicle’s relevant dynamic systems such as ABS, electronic stability control, radar or camera systems," continued Class. "The algorithm evaluates events such as braking, sliding or vehicle angle, and if a critical situation is identified, the ACR system pretensions the seat belt, helping place the occupant in a better position for a potential crash and acting as a warning to the driver that an accident may occur. Should the accident be avoided, the system automatically resets itself via the reversible actuator."