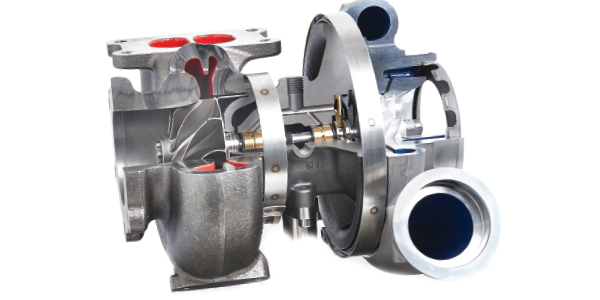 The biggest part of the problem was deposits formed when the engine was off and the turbo was heat-soaked.

In the 1980s, it was not uncommon for a turbocharger on some vehicles to last only 30,000 to 40,000 miles. The failures were almost always in the center section and caused by the lack of oil to cool and lubricate the bearings and shaft.

The lack of oil was caused by carbon deposits in the lines and passages. The biggest part of the problem was deposits formed when the engine was off and the turbo was heat-soaked.

By the early 1990s, many import car and truck manufacturers stopped using turbochargers on their engines. Many replaced turbocharged four-cylinder engines with larger displacement V6 and V8 engines. Why? Automakers had had enough of rising warranty costs and consumers began to associate turbochargers with trouble.

25 years later, turbochargers have made a comeback – and it’ s been quick. In 2010, only 5 percent of vehicles sold in the U.S. were turbocharged. By 2017, almost 28 percent of cars and trucks sold were turbocharged. How did they overcome the negative image? First, automakers do not advertise that models are turbocharged in brochures or with a badge on the trunk lid. Instead, they call the engines “Eco” or put a “T” in the engine’s name. Second, they have developed ways to cool the turbo after the engine is shut down to alleviate heat soak.

Oil as a Coolant

When the engine is running, the oil is a coolant that draws heat out of the turbocharger. But, for the oil to cool the turbo, it must flow. Restrictions in the oil feed or return lines can cause the turbocharger to operate hotter than normal.

Oil that is certified by an OEM for its turbocharged engines can handle the heat. NOACK testing is performed by heating the oil to 250˚C for one hour under a constant flow of air. The oil is weighed before and after the test. When oil evaporates, it leaves behind carbon and sludge that can damage the turbo and engine. The lower the NOACK number means less oil has evaporated. Also, some manufacturers might give a “flash point” temperature for the oil. This number is the temperature at which the oil evaporates when exposed to heat. For turbocharged engines, a higher flash point means it will not break down when pumped through the hot center section.

If you were to listen to an Audi, Fiat or BMW when the driver walks away, you might hear a faint buzzing noise. This noise is from an electric pump circulating engine coolant through the turbocharger’s center section for 2 to 15 minutes after the engine stops turning.

The run time and speed of the pump is determined by many factors. Most systems look at the coolant temperature of the engine using sensors mounted in the head, block and radiator.  Once a sufficient drop in temperature is measured, the pump will be shut off. Some systems will also look at previous calculated load and throttle position before the key was removed from the ignition to determine cooling pump run times.

Many engine management systems look at battery voltage to determine how long the pump can run to cool the turbocharger. Most sophisticated systems use the battery life monitor that measures the current draw through the positive battery cable. Most systems will prioritize cranking and starting the engine over cooling the turbocharger in situations where the battery is marginal.

It is estimated that by 2022, 50% or more of vehicles sold in the U.S. will have one or more turbochargers under the hood. But, today there are significant numbers of import vehicles on the roads that are turbocharged and need service. Some of the fixes do not involve replacing the turbocharger, but the support components that keep it healthy.

Turbo Cooling: The Real Reason Turbochargers Are Back