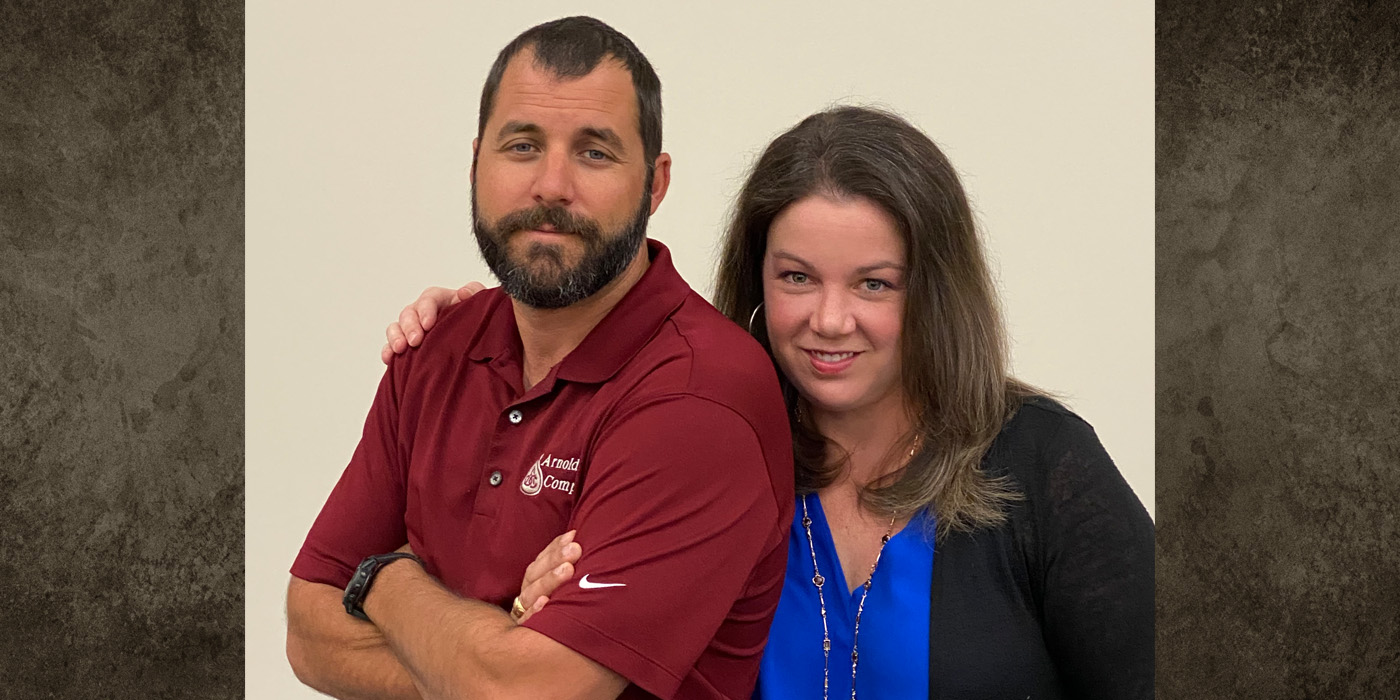 Two Of A Kind

Siblings Ashlee and Jayson Arnold are the first to admit that they’re polar opposites. While they were born just 15 months apart (Ashlee is the older one), their personalities couldn’t be much different. Ashlee describes herself as a “numbers/finance/structure” type of person, while Jayson jokes that he was born without a filter “or a politically correct button.”

In grade school, their teachers were flabbergasted that they were related.

“We are complete polar opposites in many regards, and I think that’s why it works so well for us,” Ashlee says. “We balance each other really well.”

Ashlee and Jayson have been working in the family business since they were old enough to separate coins and pull parts. Their great-grandparents, Gene and Mamie Arnold, founded the original Arnold Oil Co. in 1939 in Corpus Christi, Texas. Their dad, Jim Arnold, launched the company’s current operation in 1977. Today, the Arnold Oil Co. is a leading supplier of automotive products, shop equipment, lubricants, fuels and outdoor power equipment.

Growing up in a family business is a unique experience for kids. While their friends were hanging out at the pool all summer long, Jayson and Ashlee were pulling parts, cleaning bathrooms and doing other odd jobs. “We’re blessed to have a lot of people here with tenure, and they all kind of had kids around the same time,” Ashlee recalls. “In the summers, they would put us to work in the warehouse.”

Kids being kids, they still managed to have some fun. There were football and wiffleball games in the parking lot after 5 p.m. There were pallet-jack races. And they chuckle at the memories of driving forklifts at a very tender age.

“We used to play tag jumping on the oil pallets, running through the warehouse,” Ashlee remembers.

Jayson adds: “We had water-balloon fights at the end of every summer.”

As they got a bit older, their dad believed it was important for them to rotate between every department in the company, from accounts receivable to purchasing, so they could get a feel for the various aspects of the business.

“He said the only way we were going to learn the business and how it runs is to understand all of the components that make it work,” Ashlee explains. “Because there’s no job that’s more important than another.”

Today, Ashlee and Jayson are vice presidents for the Arnold Oil Co., and their offices at the corporate headquarters in Austin, Texas, are maybe 15 feet apart. Their roles within the company and its various divisions are very different, though, with Jayson running the Arnold Oil Co. Fuels division, and Ashlee more engaged with the auto parts division, among other responsibilities.

Jayson adds: “The running joke around here is that I make money and spend it, and she just tries to count it and keep me under control.”

Joking aside, there’s at least one personality trait that Ashlee and Jayson share: They’re both extremely competitive. Even when they were kids working in warehouse, Jayson recalls having “races at the front counter to see who could pull hotshot parts first.” When Jayson was at Texas A&M University, Ashlee would drive from the University of Texas to be his teammate in 42 (also known as Texas 42) – a four-player game of dominoes that’s played like a card game.

“She used to drive all the way to College Station just to play 42 with me because I got tired of being beat,” Jayson explains. “We always won.”

Outside of work, “everything is a competition” between the two siblings, Ashlee adds. Whether it’s a family skiing trip or a game of HORSE, they’re very much keeping score.

But it’s a different story when they’re on the job.

“Innately, we’re both super-competitive people. We do not like to lose,” Ashlee says. “But here, we play on the same team.”

And just like when they dominated the domino circuit at Texas A&M, they’ve found that they make great teammates at work. As siblings, of course, they’re both well-aware of the other’s strengths and weaknesses, as well as their own. But Jayson says it’s also a function of “being as good a friends as we have been since we were kids.”

“My brother is the more impulsive one,” Ashlee says. “He’s a salesman; he gets excited and he wants to make a decision. And I think that’s been helpful, because he pushes me outside of my comfort zone. At the same time, I think I’m kind of a counterbalance for him. That’s one way that we are really supportive of each other.”

There’s no sibling rivalry in terms of their career accomplishments either. Ashlee is in awe of Jayson’s professional skillset – his aforementioned sales acumen, for example, as well as his mechanical aptitude. “He can take anything apart; he can fix anything,” Ashlee says. “Because of that, people really trust him in the field. I love watching that side of him.”

Jayson, meanwhile, couldn’t be prouder of his sister’s career accolades. In 2019, Ashlee received the Auto Care Association’s Impact Award for her contributions to the industry, and she currently is chair of the association’s Young Auto Care Network Group and vice chair of the Aftermarket Warehouse Distributors Association. “What she’s accomplished in the past four or five years, that’s pretty special for me to see,” Jayson says.

Jayson and Ashlee say they rarely have an argument, and when they do, they “fight” better than anyone else they know. “If we have a problem with one another, we just walk into the other person’s office, we talk it out and we’re done,” Ashlee explains. “And that’s it.”

After all these years of working together – since the days of pallet-jack races and water-balloon fights – these siblings couldn’t imagine a workplace without each other.

“We completely fill different job functions, and I wouldn’t want to do it without him, period,” Ashlee says.

Jayson quickly chimes in: “Nor would I.”

Advertisement
In this article:Arnold Oil Co. of Austin

Two Of A Kind