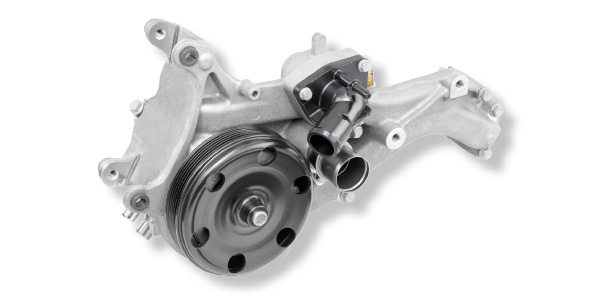 Although we tend to think of water pumps as being a one-per-car replacement part, a growing number of late-model vehicles actually have multiple water pumps on board.

Although we tend to think of water pumps as being a one-per-car replacement part, a growing number of late-model vehicles actually have multiple water pumps on board. Most of these are hybrid or electric vehicles that use one or more supplemental electric pumps to cool the power inverter electronics, battery pack and/or to keep hot coolant circulating to the heater when the idle stop/start system turns off the engine. But the list also includes some pickup trucks, vans and SUVs that employ a supplemental electric pump to increase coolant flow to the main heater core when the engine is idling, or to route coolant to a rear heater when the backseat passengers are whining about how cold it is.

The 2017 Chevy Bolt EV actually has three coolant pumps: one for the battery pack, one for the power inverters and one for the cabin heater (which routes hot coolant from an electric heater to the heater core). 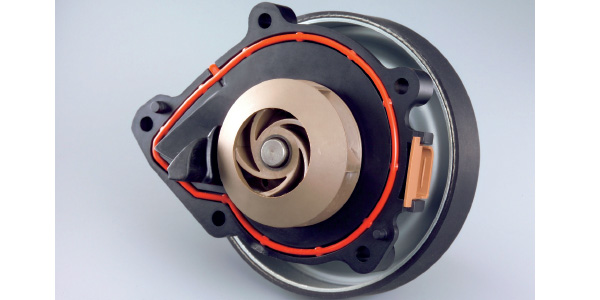 On many drag cars and other race cars (where rules permit), the mechanical water pump often is replaced with an electric pump. This can free up as much as 10 to 25 horsepower, and allow coolant flow to be increased or decreased as needed, independent of engine speed. Coolant flow also can be continued after the engine is shut off to cool down the engine quickly in the pits. Automakers are looking at doing the same thing on future production cars to improve fuel economy and reduce emissions. Reliability, of course, will be the major issue with an electric water pump.

Mechanical water pumps are fairly fail-safe and will generally last upwards of 100,000 miles or more on most late model vehicles. Of course, the more miles the pump racks up, the greater the wear on the pump seal and shaft bearings. Eventually, the pump will start to leak and/or make noise. When this happens, it’s time to replace the pump with a new or remanufactured replacement.

Sometimes the impeller inside the pump will come loose from the shaft. This obviously will prevent the pump from circulating coolant, causing the engine to overheat. Pumps that use molded plastic impellers (which are quieter and more efficient than stamped steel or cast iron impellers) also can wear down over time, causing a loss of pumping efficiency.

A customer who is buying a reman water pump may have to provide an exchange unit to receive core credit – or they may not, depending on the reman supplier and their core policy. No exchange core is needed if a customer is buying a new pump.

A customer who is replacing a water pump will also need gaskets (if not included with the new or reman pump), coolant (50/50 premixed or full-strength antifreeze) and possibly a belt, hoses and a thermostat. Replacing older (more than 10 years) high-mileage (over 100K) belts, hoses and thermostat is highly recommended to reduce the risk of leaks and problems down the road.

Thread sealer must be used on water pump bolts if the holes they screw into extend all the way into the engine’s water jacket. New bolts also might be needed if the original ones are badly corroded or damaged.

Water Pumps: The More, The Merrier