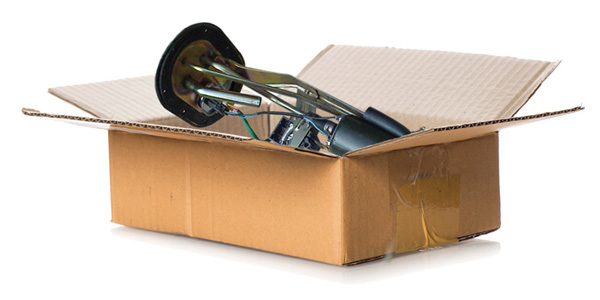 As vehicles become more and more complex, it seems everything has its own module or controller, and fuel pumps are no exception. Fuel-pump returns always have been an issue for parts-store personnel, but the instances of alleged defects have risen as technology has made it more difficult to diagnose and test fuel systems.

High-pressure direct-injection fuel systems, coupled with pulse-width modulated (PWM) fuel pumps, have made conventional fuel-pressure tests (formerly done with a gauge and access to a Schrader port on the fuel rail) less common, replaced with scan-tool readings and OBD-code interpretations. Of course, with the reliance on this sort of diagnostic software, lesser-equipped techs and DIYers are left behind, more likely to guess at the root cause of the issue.

Veteran parts specialists remember all too well the days when the cause of a “failed” GM fuel pump was more often related to the wiring harness being scorched or corroded than to the failure of the pump itself. The problem was so prevalent that many aftermarket manufacturers resorted to including a redesigned harness with their new pumps, along with installation instructions. (Raise your hand if you’ve ever heard, “You sold me the wrong fuel pump, it won’t even plug in!”, followed by a mumbled apology after you asked them to check the box for the pigtail.) More recently, it’s the Ford-truck fuel-pump driver module, which has tripped up many a technician who failed to notice the crumbled and corroded aluminum module mounted up tight to the steel frame under the truck bed. Inertia switches and fuel-pump relays also are common causes of fuel-pump misdiagnosis, if somewhat more low-tech than the driver modules and PWM duty-cycle diagnostics. Select Chrysler vehicles have their fuel-pump relay built into the main underhood fuse box (known as a TIPM or PDC). With no external fuel-pump relay, replacement of the entire TIPM/PDC is required when these vehicles stop pumping fuel. 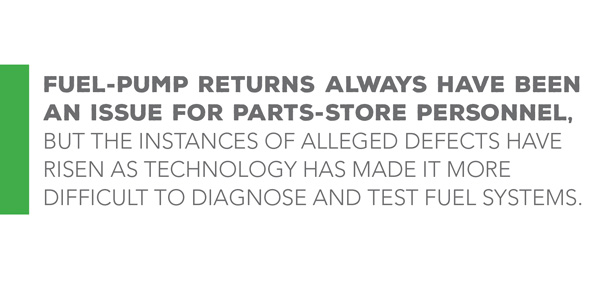 Saddle-style fuel tanks have become an increasingly popular design element for all-wheel-drive vehicles. This design allows for the tank to be mounted away from the rear bumper, reducing the chances of a rear-end collision rupturing the tank. With AWD vehicles, the driveshaft passes under the tank, necessitating the saddle design, as well as requiring twin fuel pumps to siphon fuel from each side of the saddle. Twice the pump, twice the problems … especially when it comes to determining which pump has failed, and which pump is considered primary and secondary among the catalog listings!

When diagnosis becomes increasingly difficult, our customers are more likely to guess at a solution, and swapping out parts has long been the go-to “quick fix.” Unfortunately, we all pay the price for their misdiagnosis or lack of training. Whatever the cause of the misdiagnosis, fuel-pump returns are an increasingly costly problem for both the parts store and the manufacturer. The failure rate for one major aftermarket manufacturer is below 5 percent; however, it has been estimated that at least half of the “defective” returns sent back to them test out perfectly fine, or have been physically damaged during shipping or installation. In addition, nearly 75 percent of the pumps that actually are dead on arrival failed due to outside factors such as fuel contamination, rust and debris from the fuel tank, and similar issues.