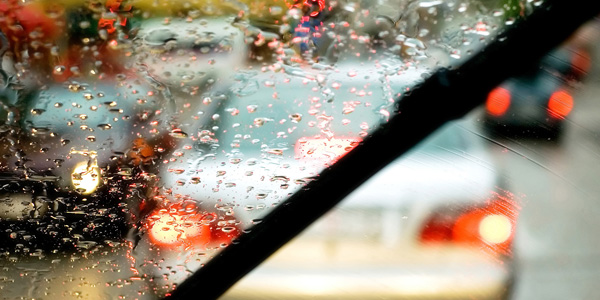 The No. 1 mistake that many motorists make when they realize a wiper is bad is to replace only the obviously bad wiper and not the pair. They think they’re saving money, but sooner or later they will have to replace the other wiper too.

Some would say that wipers sell themselves. When the old wipers wear out, a customer buys a new set of wipers. Right? Trouble is, many motorists don’t know when their wipers are worn out, or ignore an obviously bad set of wipers. What’s more, few motorists replace their wipers regularly for preventive maintenance. Many customers also need help when it comes to choosing the “right” set of replacement wipers for their car or truck.

Any wiper that is chattering, streaking, torn, flapping in the breeze or otherwise doing a poor job of clearing the windshield is a wiper that needs to be replaced. The No. 1 mistake that many motorists make when they realize a wiper is bad is to replace only the obviously bad wiper and not the pair. They think they are saving money, but sooner or later they will have to replace the other wiper, too. Better to replace them both at the same time because both blades are needed to keep the entire windshield clear.

Driving with one good wiper and one bad one is kind of like driving with one eye closed. You don’t get the entire picture, and it’s possible you might miss seeing something that could result in an accident!

Wipers have a tough job. Not only do they keep rain off the windshield, but they also have to brush off bug splatter, dust, dirt, snow and sleet. Winter driving anywhere north of the Sunbelt means wipers have to deal with ice buildup on the blade frame. Traditional-style wipers that have a metal or plastic frame and bridgework that supports a separate blade are very prone to ice clogging. As the ice builds up, the wiper becomes less able to flex and follow the curvature of the glass, resulting in skipping, streaking and poor visibility. The solution is to switch to “winter blades” that have flexible rubber covering over the frame so ice can’t clog the framework. Or, to convert to a beam-style blade or hybrid blade that has no exposed framework. 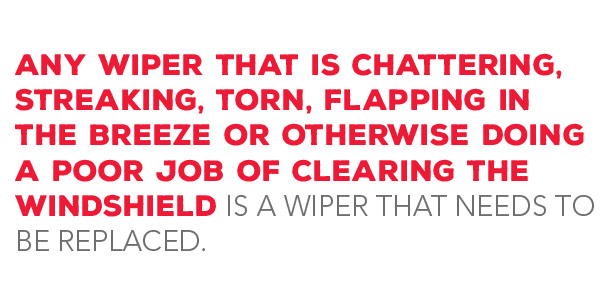 Beam-style blades have been around for quite a few years now, and are used as original equipment on many late-model vehicles for a reason: They are better-performing blades. The low profile of the wipers resists wind lift at highway speeds, and the built-in spring spreads pressure more evenly across the entire blade surface for a cleaner wipe. They also tend to be quieter than traditional blades because there is no framework to flop back and forth every time the wiper changes direction.

Upgrading to a beam-style blade is well-worth the extra cost for a vehicle that has traditional frame-style wipers. Ditto for “premium”-style wipers. Premium materials provide longer life and better wiping performance, especially during cold weather that causes many natural rubber blades to lose their flexibility.

Replacement wipers are sold by length. On most applications, you simply match the length of the old blades to the ones on the rack to find the right replacement. Driver- and passenger-side wipers are often a different length, so it’s important to make sure both are correct. A blade that is too long may hit the edge of the windshield or interfere with the other wiper. A blade that is too short may leave a swath of uncleared glass at the top or bottom of the windshield that can hinder visibility.

Rear blades on hatchback cars, CUVs, SUVs and minivans also are important for safe driving. If the driver can’t see what’s going on behind his vehicle when driving or backing up, it may create a dangerous situation. Dirt and road mist tends to build up on the rear glass, so it’s important the wiper does a good job of clearing away the grime.

Related items that may be needed when replacing wipers include windshield washer fluid (cold weather for winter driving) and possibly new wiper arms for an older vehicle. Over time, the spring inside the wiper arm may weaken or break, preventing the wiper from wiping cleanly.

Advertisement
In this article:Technical, Winter Driving