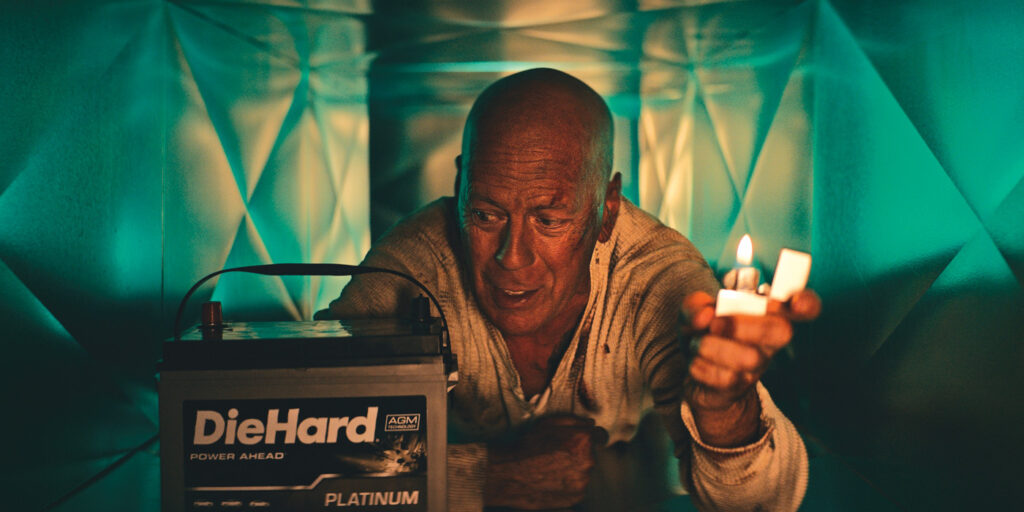 When Advance Auto Parts was contemplating how to make the biggest possible splash with its newly acquired DieHard battery brand, Chief Marketing Officer Jason McDonell wasn’t convinced that a marketing campaign connected to the “Die Hard” movie franchise was a slam dunk.

At least not at first.

“On paper, it’s sort of logical: You take the “Die Hard” movies and you take the DieHard battery, and there might be something that works,” McDonell said during a virtual presentation at the AASA Vision Conference in March. “But honestly, I wanted to steer away from that, because that was almost too easy … until we saw the idea.”

At first glance, the idea was simple: Create a “Die Hard” mini-movie “featuring the Die Hard batteries as a co-star, uniting the two classic brands for the first time ever,” McDonell explained. But in art, just as in life, the devil is in the details. And doing it right would be a tall order – taller, perhaps, than Nakatomi Plaza itself.

So how could an auto parts retailer, of all things, pull this off without disappointing the beloved film’s legions of fans? The logical move would be to enlist the film’s most identifiable character. In this case, we’re talking about “the fly in the ointment, the monkey in the wrench, the pain in the a**” (as he describes himself in one scene): John McClane, the off-duty NYPD cop who singlehandedly takes down a group of German terrorists after they seize control of Nakatomi Plaza in downtown Los Angeles on Christmas Eve.

When Advance started bouncing around the idea of having Bruce Willis reprise his role as John McClane, “it started to make more and more sense,” McDonell said, “especially when I started to think about John McClane himself.”

“He’s a great fighter,” McDonell said. “He is brutally honest. He doesn’t give up. He’s a leader who doesn’t take no for an answer, and he’s an everyday hero. Sound familiar?

“Well, our DieHard battery is an everyday battery. It’s powerful. It’s durable. It pushes the boundaries, and for sure it has unrivaled performance. So the two of them together made a ton of sense
for us.”

Advance reached out to Willis, and “he got back to us quickly,” according to McDonell. The company got the director it wanted too: John Suits, who worked with Willis on “Breach,” an action/sci-fi film released in 2020. But even with those pieces in place, other challenges remained – such as shooting in the midst of a global pandemic.

“We needed to make sure that we took the same quality of care that we have for our employees and our customers at each of our stores across the country,” McDonell recalled. “And when we set that as the standard, we knew we could accomplish it.”

The two-minute film begins with McClane (Willis) and a dead car battery. Before he can make it to Advance Auto Parts, McClane crosses paths with old foe Theo (Clarence Gilyard Jr.) and his crew. After a narrow escape and a chance meeting with limo driver Argyle (De’voreaux White), the action accelerates.

For “Die Hard” aficionados, there are 24 different references to the film in the commercial, according to McDonell. The most obvious ones are the Advance counter person humming Beethoven’s “Ode to Joy;” McClane crawling through an HVAC duct (although he doesn’t say, “Come out to the coast, we’ll get together, have a few laughs”); and, of course, McClane’s signature line, “Yippee-ki-yay” bleep-bleep.

The mini-move – entitled “DieHard Is Back” – aired Oct. 18 during the FOX “America’s Game of the Week,” featuring Green Bay vs. Tampa Bay. (October is designated as a National Car Care Month.) The game was a rout, with the eventual Super Bowl champion Buccaneers cruising to a 38-10 victory. What Advance did to drum up excitement for the ad prior to kickoff was much more compelling than the game itself.

For starters, Advance enlisted the help of Willis’s daughters – Rumer, Scout and Tallulah – “to leak the story that DieHard is back,” as McDonell put it. The day before the game, the sisters posted a 15-second video teaser on their respective Twitter pages, showing McClane whistling “Ode to Joy” while walking through a dystopian landscape. There’s no dialogue in the teaser – just some text that says, “As one story ends, a new one begins. 10-18-20, #DieHardIsBack.”

Former “Saturday Night Live” cast member Andy Samberg (“who is infatuated with John McClane,” according to McDonell) teased the film on Twitter too. On gameday, the anticipation hit a fever pitch, as Troy Aikman, Joe Buck, Erin Andrews and Emmitt Smith tweeted the 15-second teaser before kickoff. (They also tweeted the full two-minute ad after it aired.)

So did “DieHard Is Back” measure up to the pre-game hype? You can decide for yourself by watching the video on Advance’s YouTube page, at https://youtu.be/W7kFGGFI9Xo.

If the YouTube feedback is any gauge, the ad was a rousing success. As of March 29, the film had amassed 2.3 million views, 17,000 likes and hundreds of positive comments. And there’s nothing wishy-washy about the feedback. One commenter called it “genius marketing,” while another called it “Super Bowl worthy.” Several commenters quipped that they liked the ad better than some of the “Die Hard” sequels.

When McDonell watches “DieHard Is Back,” he has a different take. “I see teamwork. I see a passionate team. I see clarity of an idea,” McDonell said. “And then I remember the moment afterward when feedback start popping up on Twitter. And we started getting feedback that it was a Super Bowl ad, that it was another ‘Die Hard’ movie, or, ‘Now I know what happened to the end of the story of John McClane and Theo.’ And the fan of the movie ‘Die Hard’ now became a fan of the movie and the DieHard battery brand. What was [such an exciting concept] has exceeded all our expectations, and I’m just so thankful that we had such a great team.”